Well finally I get a chance to sit down and write this after a manic few weeks of amazing Winter climbing…while also in the process of moving house! After a somewhat frustrating Winter season with very little notable ascents, the first days of Spring  brought a flurry (excuse the snowy pun!!) of truly remarkable and memorable days in the hills and mountains.
Three weeks ago we headed over to the Highlands for our annual Scottish “fix” and boy what a trip that was!!!


Due to our early morning flight out of Dublin we got straight into the groove on the very day we arrived and we kicked off the week with an enjoyable ascent of the iconic jagged peak – the “Cobbler” by the easy Central Gully. This magnificent shapely rocky mountain is located in the romantically named “Arrochar Alps” which are a lovely range of hills situated at the head of Loch long, some 65km North of Glasgow, not far from Loch Lomond. And so began our week of superb weather and exhilarating gully climbs!

For Day 2 we headed to one of Scotlands finest Winter Climbing venues, Stob Coire Nan Lochan, high up above the magnificent valley of Glen Coe. Here we climbed one of the all time classic Scottish Winter climbs  – “Twisting Gully” III 4****

A hugely enjoyable route and one we’d  on our tick list for a while.We descended back down into the Corrie by a quick glissade down Broad Gully and eyeing up the impressive cliffs and buttresses were very tempted to have a crack off another “Stob Coire” classic – “Raeburn’s Route”. Due to the fact that we had a long week of climbing ahead of us we reluctantly decided to leave it for another day and began the long walk back to our car far below in the valley. 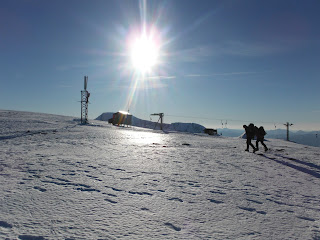 Day 3 and feeling a tad both lazy and tired we decided to avoid having to endure a typical monster of a Scottish walk in and instead headed to a nearby mountain called Aonach Mór which is served by a handy gondola to ferry ski-ers up its slopes. As none of the four of us had ever climbed here before we were in high spirits and excited to be broadening our knowledge of new climbing areas as well as avoiding the usual slog….The high spirits didn’t last long though as an hour after leaving the top ski lift station we were seriously regretting our haste of not taking a proper look at our map and making a more precise plan of our route to the climbing corrie. Instead,in sheer stupidity we had just followed another group in the general direction we wanted to take thinking “surely” they’re off to the same climbing area… Now after a half hour of hard toil we realised the party ahead of us were in fact heading elsewhere and so finally we took out the map and sorted out the route proper 🙁 So much for the easy walk in as we finally arrived at our objective an hour and a half after leaving the cable car!!! BUMP…. 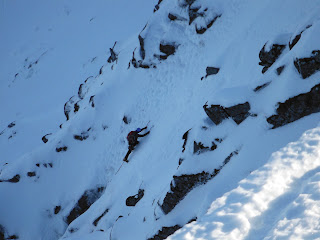 The impressive Corrie of Aonach Mór’s Coire an Lochan forms part of an almost perfect spherical bowl,centred around a lochan and surrounded by stunning towering granite buttresses split with lots of deep icey gullys and snowy ridges.A tenuous traverse from our approach slope to the half way point of the corrie brought us to the realisation that climbs on the East facing walls were melting fast with alot of the routes and the ridges in particular definitely no longer in condition. Down side to praying for sunshine and bright blue skys!!! Quick look at the guide book had us deciding on a worthy objective  – “Left Twin” III/IV ***, a superb 120 metre gully climb. This route provided us with a really enjoyable bit of sport with excellent solid ice the whole way and we topped out in blistering sunshine and blue skys with barely a wisp of wind and truly breathtaking views of Ben Nevis and majestic mountains in all directions. 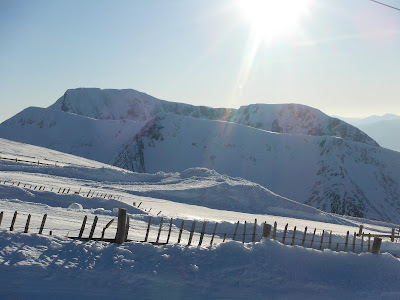 Day 4 and we drove the 45 minutes south to climb something  “easy” and have a rest day of sorts on the classic mountain guarding Glencoes southern end – Buachaille Etive Mór.
Buachaille Etive Mòr, meaning “the great
herdsman of Etive”, generally known to climbers simply as The Buachaille is a mountain at the head of Glen Etive in almost a perfect pyramidal form, as seen from the A82 road when travelling towards Glen Coe, makes it one of the most recognisable mountains in Scotland, and one most depicted on postcards and calendars.
Buachaille Etive Mòr takes the form of a ridge nearly five miles in length, almost entirely encircled by the River Etive and its tributaries.
From our view point on the main A82 road we decided to head up the massive “Great Gully” which cuts up the North side of the peak. It was first climbed by the legendary mountaineer Norman Colllie in 1894 and is only recommended after a period of settled weather due to it being a notorious avalanche trap. As it goes by the modest grade of II/III it was the perfect route for a days soloing on a such a nice sunny day and provided us with plenty of sport with several  fine pitches of superb grade III waterice. It’s massive length of over 360 metres had our calves burning like hell and again rubbished our aim of an “easy” day out !!! Even got to use the rack which we’d brought along “just in case” as we discovered a really nice 35mtr ice fall high up near the gully top. Topped out again to amazing sunshine and a breath taking mountain vista.Definitely the biggest and most enoyable gully climb both myself and Mick had ever climbed!!! 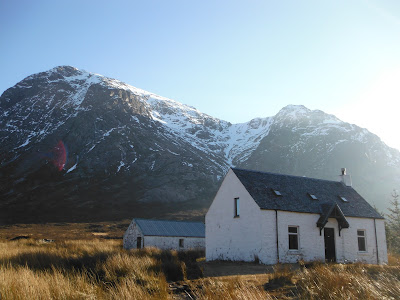 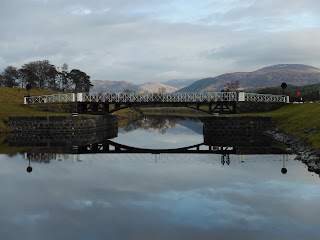 Day 5 and though the weather is yet AGAIN perfect for climbing we reluctantly decide to have a well earned lie-in and take a badly needed day off. We do the normal rest day stuff, browsing gear shops, picking up gifts for home and further food provisions and the sorting of the rack & gear….Later in the day we take a chilled out relaxing stroll along the banks of the beautiful and still waters of the Caledonian Canal which virtually runs right past the door of our rented Chalet. The canal runs some 62 miles (100 km) from northeast to southwest. Only one third of the entire length is man-made, the rest being formed by natural Lochs which are part of the Great Glen, a geological fault in the Earth’s crust.The canal was conceived as a way of providing much-needed employment to the Highland region but even provided much needed work to Irish workers brought over to help in it’s construction particularly during times of high absence by the Scottish workforce during and after the potato harvest and the peat cutting season. 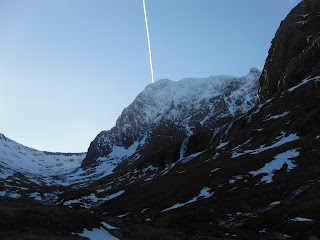 Day 6 and for our final day we decided that we just HAD to get a route on Ben Nevis under our belt this week. We awoke early but not early enough and after a short drive landed at the North face car park. Plugged into our MP3s the walk in was a breeze and nothing like the previous slogs up here we’d experienced before. “One” by Metallica phased out as I arrived at the CIC hut a few minutes behind a now beaming Mick…The sun had come up about a half hour before and the mighty North face of “The Ben” sparkled in a glistening winter coat…Truly awesomeeee!!

We now began the ascent up into the magnificent high bowl of “Coire Na Ciste” up to our objective for the day,the classic climb -“Green Gully” IV 4***. This 180 metre narrow gash was first climbed by another early climbing pioneer, the legendary Harold Raeburn in 1906 and went unrecognised for many years as no one would believed in those days that it could be climbed !!! 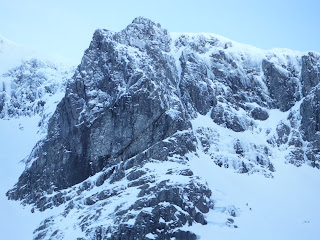 There was just one other party ahead of us and as we arrived at the first belay and  as we began to gear up I disastrously dropped our entire chain of 6 screwgate Krabs and watched as they whizzed away like a flash  out of sight far below to the Corrie floor..DoooHHHHH!!! Ah well…shit happens….I thought about abbing down and trying to find them but decided not to bother as the thought of all the wasted effort getting down there,flaffing about in the snow trying to find them and then the tortureous slog back up…with the high chance the next time they’d show up would be in the next thaw….Some one won’t believe their luck when they find fifty quids worth!!!

Anyway we made do with the remaining Karabiners we had and the climbed the sublime route in good time considering the party on front had us waiting on each pitch. Probably a good thing in ways as it forced us to stop and fully take in,enjoy and appreciate our spectacular surroundings.Topped out yet AGAIN to gorgous bright sunshine and wonderful blue skies.We skipped and danced our way down the pony trek on a high from the weeks climbing we’d had and soon came across a stuggling Dutch walker who was having great great difficulty remaining upright without crampons. We asked if we could offer any assistance which he gladly accepted and we began short roping him slowly down the ice and snowy track until we finally emerged from the snow line. It emerged he had no equipment whatsoever!!! Not even a bag…NO map, No axe, No food, No drink…NOTHING!!! And we met plenty of other unprepared souls slipping and sliding their ways up and down.Yeah it’s a track and agreed it was a lovely day but this is STILL the highest mountain in Britain and Ireland….IN WINTER!!! Hats off to the local MR teams who have to come to the aid of these clowns on a regular basis.. I commend you all… 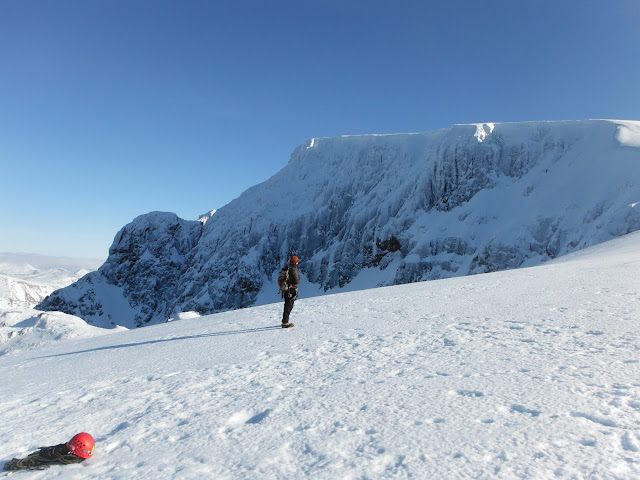 And so ended a marvellous and super week in my most favourite place on earth, the highlands of Scotland. Seems we were rewarded for all the wild wet days we’ve spent slogging about over here on different trips wondering why we bother coming to this bloody place to suffer when we could be in Italy or France or just ANYWHERE else!!! Scotland is magnificent… it’s breathtaking landscape, wildlife and it’s stunning scenery, it’s spectacular mountains and climbing and of course it’s people make it a truly special place….My faith has been restored 😉


Since returning from my Scottish trip I’ve been lucky to enjoy some really excellent “nights” out ice climbing in the wonderful Comeragh Mountains of County Waterford… Blog post in a day or 2 I promise….