Well last weekend was yet another extremely busy one for us and a hugely memorable one too for a lot of reasons.


It began on a gorgeous evening in the beautiful village of Keel on the Dingle Peninsula with the beginning of a charity mountain event called – “Sam to the Summit”, of which I’d been asked to play a lead guide and safety role.

An official event opening and parade through the village was held on the Thursday evening where the Sam Maguire cup and the 32 medal winners were presented to the crowd by Keel GAA club, who are celebrating their 125th year in existence.
I was present on the evening  to meet all the climbers I’d be guiding to the summit of Corrán Tuathail the following day and to give a brief safety talk and fill them in on what to expect.
Lots of GAA legends gathered and listened and I looked forward to meeting them all again the following morn in Cronin’s Yard.

Friday morning arrived as did the sunshine and soon the buses full of over 100 apprehensive climbers began to arrive too. Packed lunches were distributed and after another more thorough safety talk and with a forecast you couldn’t even have even wished for we began to leave the yard in groups of approx. 2 dozen or so with 2 guides responsible for each.
Today history would be made as the Sam Maguire cup and an All Ireland football medal from each of the 32 counties would be held aloft on the warm sunny summit of Ireland’s highest mountain as part of the innovative and unique fundraising event. Some of Gaelic football’s most iconic names and their medals were on hand to help Sam to the top which was the culmination of months of planning to deliver a truly special occasion for all involved. 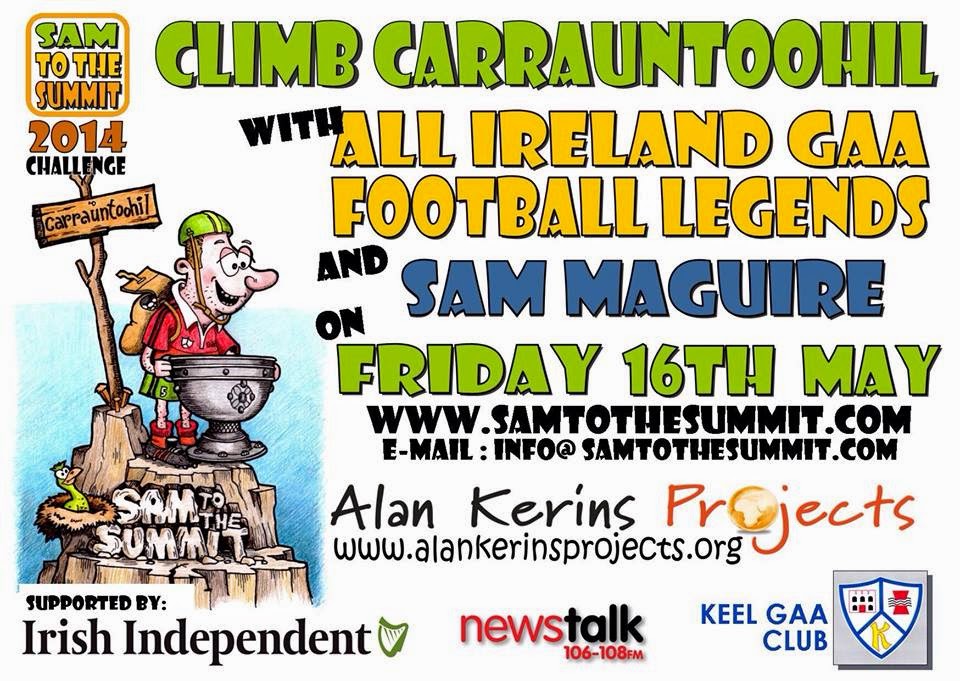 The climb raised the staggering total of €100.000  and much needed funds for Alan Kerins Projects which provides support to the poorest and most disadvantaged people and communities in Zambia, Southern Africa through their dedication, friendship and partnership. As I had the responsible task of overseeing the safety on the mountain I decided to leave the Yard last and sweep the back markers and slower walkers and pretty soon I was guiding a small group of 5 who’d separated from the main pack.

One of these five was the renowned and legendary GAA commentator and broadcastor – Mícheál Ó Muircheartaigh who at the ripe age of 83 had made no promises that he’d make the top, although he never doubted himself. As our slower pace  now meant we had fallen much further behind the rest of the field I made the decision to take a shortcut up the much steeper and less straightforward “Devil’s Ladder” route instead of the much longer but easier “Zig-Zag” trail with the aim of gaining vital ground on the others.
The detour paid off, we gained much time and we topped out of the Ladder section just as the back of the main group passed by!!!

But there was still a way to go to the top yet. I got on the radio and alerted the now gathering crowd on the summit to expect the unexpected, that Mícheál was on his way. This had not been in the initial plans and I along with everyone else had only thought he was accompanying the group to the foot of the Mountain but plans change and this man of extraordinary zest and energy was just as determined as all the others to get to the top and so too relish in the glory of such a hugely historic day. As we pace out the last few steps to the summit we are joined by Alan Kerins for the final steps and an emotional impromptu guard of honour by the other now patiently awaiting summiters applauding as Míchaél lifts the Sam Maguire aloft. 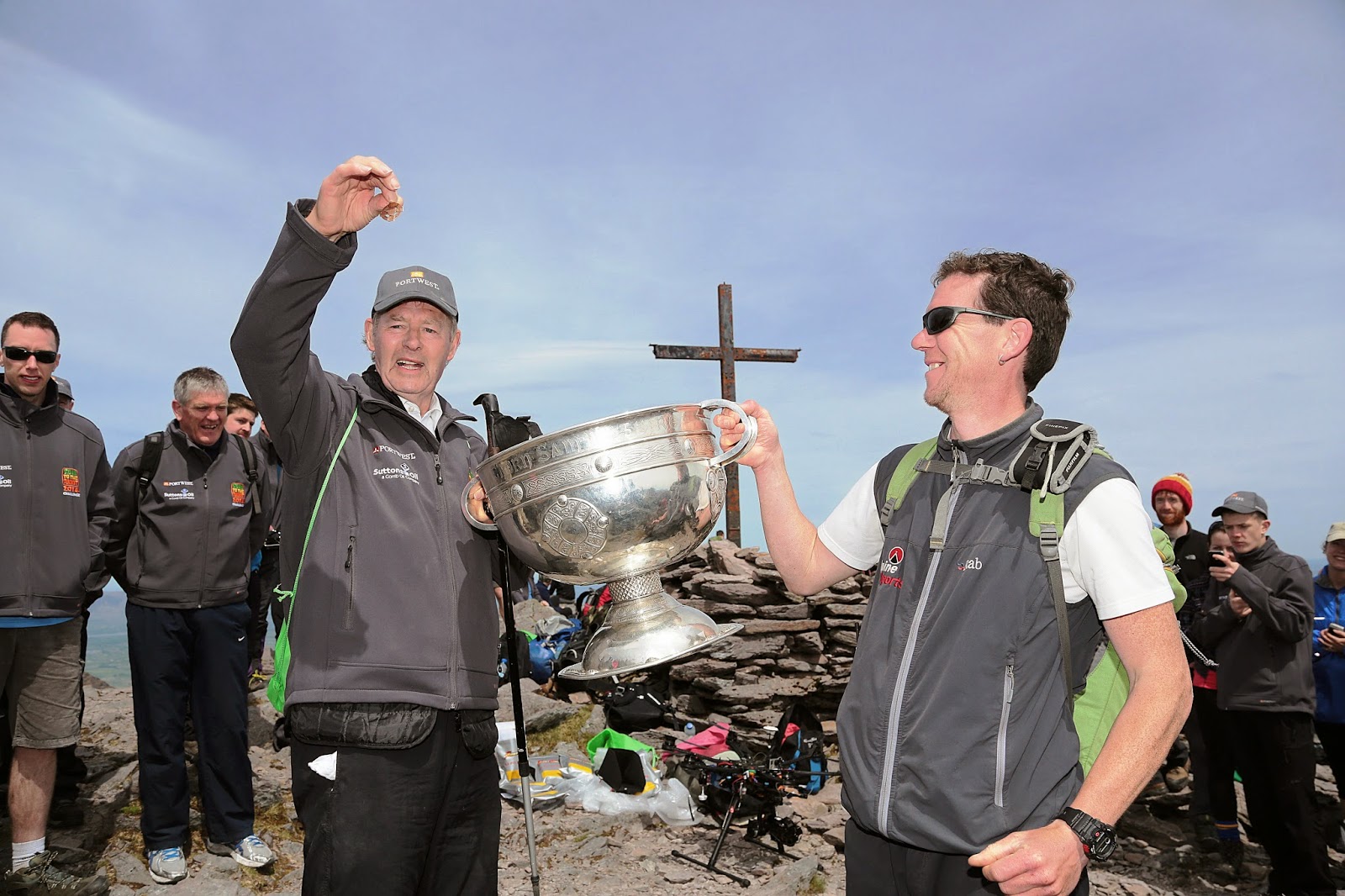 If climbing Ireland’s highest mountain takes inspiration and perspiration, even for a group of All-Ireland winners, Ó Muircheartaigh, in that moment, provided both: with that he delivers a sort of impromptu sermon of praise on the mount that echoes around the high silence.

Photographs, speeches and hearty backslapping all around and soon I deliver a speech of my own as I alert the crowd to the safety concerns of the long decent with the old clique “The Top is only half way” and the climb is only in the bag when we return back through the gate in Cronin’s Yard. 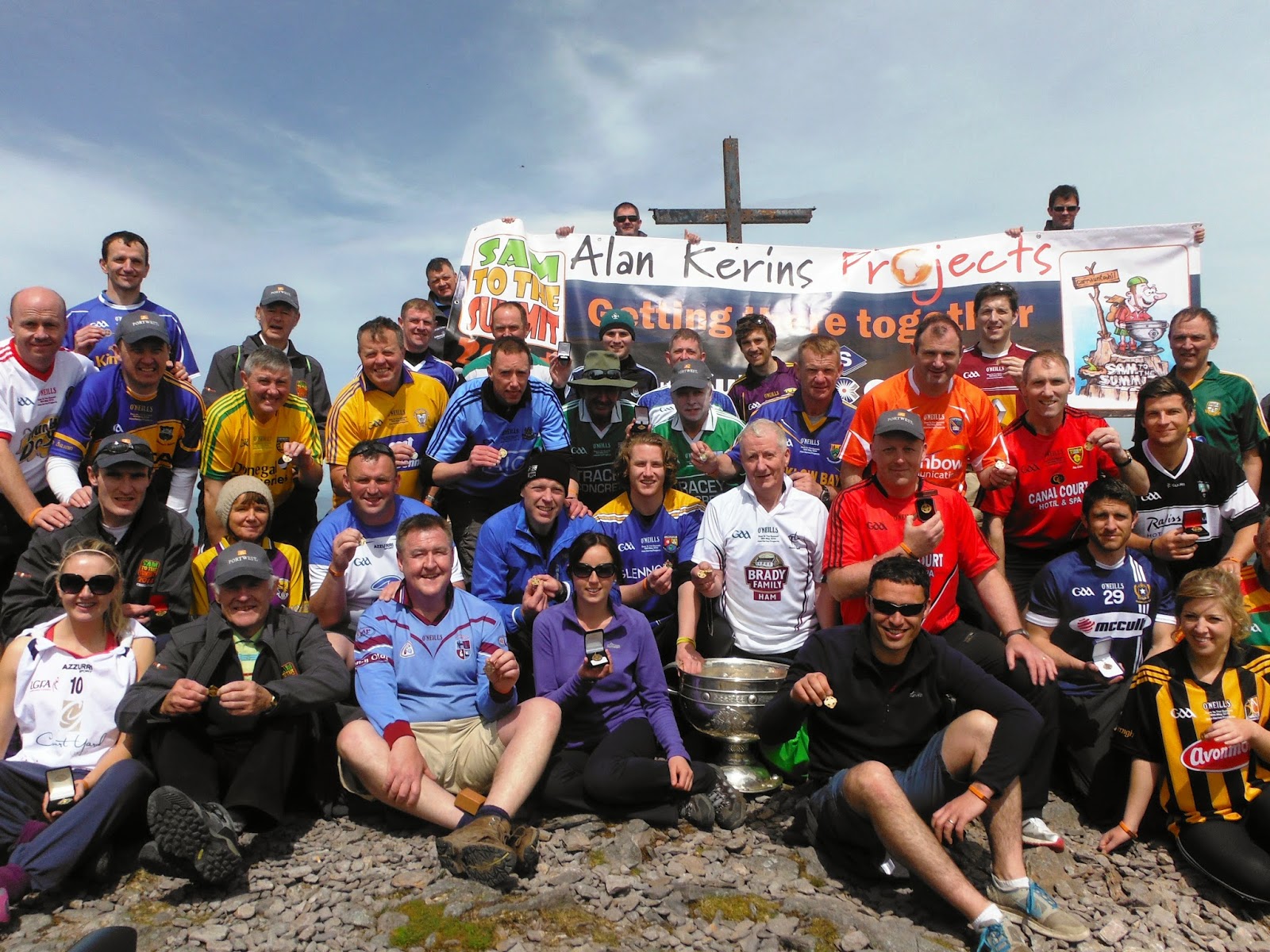 The long slow descent passes off without incident and 3 hours later my small slower group of five board John Cronin’s awaiting Jeep which I’d arranged and he’d driven up as far as the machine would go into the rugged wilds of the Hags Glen.
Well it’s in the bag for sure now as we arrive back in the Yard at approximately 7:30pm hugely satisfied and exhilarated to have Experienced the Adventure on such a massively fulfilling and historic day.
I waved off the last of the tired crew as they depart by bus for the after party in Sammy’s Restaurant at Inch beach and kick off the boots and relax with the Cronin’s over a welcome mug of coffee as we quote to one another the many highlights and tales of such a wonderful historic and truly memorable day.

Well that was last Friday and as I was again guiding groups back up Corrán Tuathail for the following 2 days and so I quite wisely resisted the temptation to join the after party in Sammy’s. On Saturday we guided a group totalling 27 to the top via the Devil’s Ladder on another  superb bright sun shiny day and on Sunday the sun shone yet AGAIN and we returned yet again to the Reeks, this time guiding a much smaller group of 3 to the summit by the altogether much steeper route of the magnificent and airy Howling Ridge. Three tremendous days spent in wonderful company showing off the wondrous delights of these mighty mountains.

As if the weekend couldn’t get any better, on Monday morning we received an Email from TripAdvisor notifying us that we’d just been awarded their prestigious –
2014  “Winner of Certificate of Excellence”. 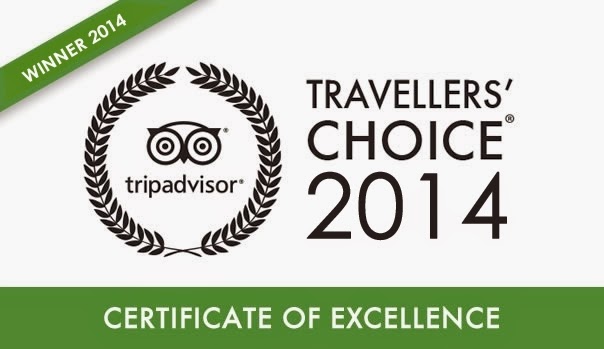 Now in its third year, the award celebrates hospitality excellence and is given only to establishments that consistently achieve outstanding traveler reviews. Winners of the Certificate of Excellence are located all over the world and represent the upper echelon of businesses listed on the website, with only the top 10 percent receiving the prestigious award. This prestigious award recognises businesses that consistently earn top ratings from travellers.


To say we are delighted would be little of an understatement and we are truly astounded and overjoyed to receive this tremendous accolade and recognition for all the work we have put into providing safe, enjoyable, hugely fulfilling and high quality activities to our clients. Thanks so much to ALL who have taken the time and effort to review their days spent climbing with us and many thanks for leaving such glowing reports of our high level of care and customer service.