Well the time had come and I was really excited to be finally be getting on with the job of hosting Part 3 of our “Vertical Adventures” lecture series. Last Friday night was the highlight of the series and I was absolutely delighted that we’d managed to line up one of the VERY BEST rock-climbers who has ever walked (and climbed) on this planet, a true idol of mine – the legendary JOHNNY DAWES!!!

Friday morning and we had some time to kill before our arranged afternoon Master-class session. After a hearty full-Irish we decided to pop over to Stephen Pearce Pottery, nestled in the lovely village of Shanagarry in East Cork to give him a tour of the work-shop where I do a wee bit of work when I’m not working in the hills and mountains. 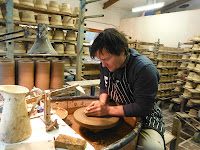 After showing Johnny the process and the many stages involved in creating the pottery,it was time for him to have a go on the wheel and we were rightly impressed with his creations…
Well he IS bound to be good with his hands isn’t he !!!!
Massive thanks to Ron in the pottery for his help and patience…Johnny loved it and is already thinking up possible names for his own little pottery venture… “Stone Monkey” or “Pebble Pottery” perhaps!!!

Well that’s the snow gone for sure now I sighed!!!

Had been down the previous day to a Wintry Mahon valley in the Comeragh mountains of Waterford  scouting out the condition of a particular ice-fall I had hoped would shortly be coming into condition due to the cold snap. My optimism was well founded as it was indeed forming nicely but still needed a couple more days of these low temps to get it into decent climbable “nick”…


After a spot of lunch we then headed into the excellent “Midleton Community College” climbing wall where 8 of us were to receive a coaching session from the master himself.Johnny gave us some excellent and unique testing boulder problems while at the same time throwing in some mad and you could say… “interesting” solutions …. !!!
It did take while to totally understand the concepts Johnny was getting at but when we did finally “get it”, I think we were all rightly impressed with the progressive and dynamic pro tips which we had picked up from such a highly accomplished and inspiring climber… 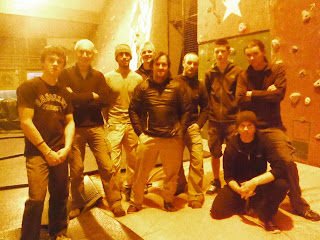 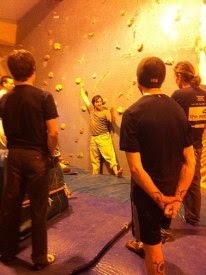 Massive thanks to Midleton Community College for the use of their brilliant facility for our Master-class..It was the perfect venue for type of instruction Johnny was giving us…


Returned home with Johnny through the torrential rain and flooding to be welcomed by a a stressed out Mrs K who due to the extreme rainfall was forced to deal with a deluge of water flowing in our back door while I was away enjoying myself…. Ooooooops!!! Just had barely enough time for a quick bite before we headed out again through the wild windy night ,this time to Cork to prepare and get things ready for the evening lecture.

Arrived in UCC with plenty of time to spare, which is just as well as Johnny now realised that in the hustle and bustle and in our rush to get out the door so’s we’d arrive early, he’d forgotten a vital power cable for his lap-top !!! A few panic phone calls and relief…a replacement cable was tracked down.

Finally, slightly later than advertised,the much awaited lecture got underway.

Admittedly it was a somewhat smaller crowd than what we had hoped for, due partly no doubt to the adverse weather, but still a good many had come along to hear Johnny speak on his first ever visit to Cork. I’ve no doubt that many of those who did make the effort to venture out on such a wild and horrible night felt both privileged and honoured to be in the presence of such a charismatic and inspiring climbing icon.

Highlight of the evening for me was seeing the footage of Johnnys ascent of his Welsh slate Master-piece  – “The Quarry Man”…. Crazy stuff indeed!!!

I can tell you now, it was a lecture like no other and one that I for one will remember for a long time to come!!! It was a real pleasure to hear him speak,to listen to his opinions and to hear his revealing and at times deeply personal account of his life and times and of course his many many ground breaking first ascents and pioneering climbs.

Saturday morning and Johnny departed early for Awesome Walls Climbing Centre in Dublin where he was due to give 2 more Master-Class sessions,this time to a travelling contingent from the Cork Youth Climbing Club who are the  sole beneficiary  of proceeds from this years series of lectures.Unfortuntely I was unable to travel but by all accounts the young climbers were highly impressed and inspired by both meeting and then being coached by the legend that is …..JOHNNY DAWES !!!

A MASSIVE thank’s again to ALL of those who came out last night to hear Johnny Dawes speak as part of our “Vertical Adventure” lecture series .

Also a BIG BIG  thank you to all those who donated some really brilliant prizes for the evening’s raffle which helped raise even more cash for this years beneficiary – Cork Youth Climbing Club. http://www.corkyouthclimbingclub.com/

We are hugely grateful to the following :

AGAIN A Big thanks to Our equipment partner – ALPINE SPORTS http://www.alpinesports.ie/ 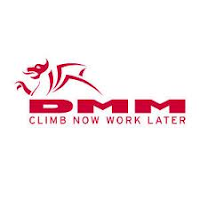 Also a MASSIVE thanks to TheCorkNews for again helping to promote this and ALL the other events in our lecture series by giving the talks space in their print..MUCH Appreciated!!! http://thecorknews.ie/

Looking forward to the final instalment in the series coming up on Feb 7th…. 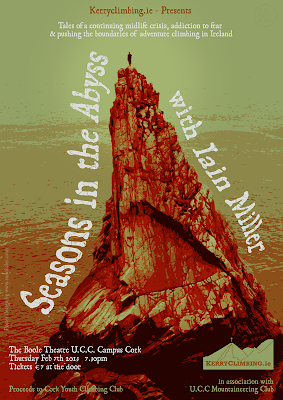 IAIN MILLER – “SEASONS IN THE ABYSS”

Following on from the success of last seasons brilliant lecture by Iain… We decided we just had to have him back!!!
The focus of this talk will be a continuing mid life crisis, his addiction to fear and pushing the boundaries of what a V Diff climber is capable of.

During these wee adventures Iain has swam with bull seals, paddled next to a killer whale, met and spoke to an angel (after falling 20m off a sea stack into the sea), being blown out to sea in his wee dingy until he lost sight of Ireland , watched his climbing partner die at his feet and off course also had an outstanding amount of fun whilst being terrified and facing mortality!!!