AFTER following in the footsteps of Prince Charles and Camilla in Derrynane on Wednesday, Taoiseach Leo Varadkar retraced their journey to Killarney but to enjoy something a tad more adventurous instead.

The Taoiseach had travelled from the beautiful surrounds of Derrynane house – Daniel O’Connell’s ancestral home where he had hosted an important cabinet meeting.
But while the Prince of Wales and the Duchess of Cornwall opted for the sedate surroundings of Muckross House and Killarney House, the Fine Gael leader and leader of our country was far more adventurous as he took to the spectacular mountains for his 1st ascent of the mighty Corrán Tuathail under the expert care and guidance of our very own guide – Piaras.

Mr Varadkar, a keen fitness enthusiast, enjoyed a hugely informative, fascinating and truly wonderful day on the magnificent MacGillycuddy’s Reeks and the Kerry sunshine obliged with a prolonged appearance as he finally scaled the BIG 1. They began their ascent at 8:30am from the traditional and most excellent – Cronin’s Yard. It was an intimate group of just 5, all extremely fit and up for a super day – An Taoiseach, his assistant, his protection officer, Kenmare Fine Gael councillor Patrick O’ Connor-Scarteen, and KerryClimbing lead guide – Piaras.

“It was a stunning morning as we strolled in the beautiful Com Caillí / Hags Glen. We would be ascending by one of the most awe-inspiring routes – Eisc an bFiach, more commonly known as O’Sheas gully. Nice to take Mr Varadkar off the more beaten trail, a stiffer challenge which I was confident all in his group were well able and equipped for.

A steady but relaxed pace was set and the views just got better and better the higher we ascended. It was a beautiful sunny day, one to be appreciated and enjoyed and a wealth of fascinating information in relation to the many facets of these mountains and valleys was provided throughout the course of this memorable ascent.

An in depth back ground was provided of the ancient geography, ecology, climbing history, mountain rescue, local place names and most importantly – access & ownership. I took the opportunity to promote the impressive work undertaken by the committee and structure that is tasked with maintaining and managing these majestic peaks – the MacGillycuddy’s Reeks Access Forum>>> of which I am honoured to serve as guides and commercial operators representative.

It surprised me to hear that An Taoiseach didn’t actually realise that Carrauntoohil and the majority of the reeks were actually in private ownership!!!

I highlighted the real fears of landowners in relation to the huge increase in recreational users and its possible effect with regard to the lack of a proper Insurance Indemnity scheme. I highlighted to Taoiseach Varadkar and councillor O’ Connor-Scarteen, of the rapid deterioration and erosion of established trails, the need for investment in this and the possible means of funding. I told them all about the struggling and declining hill sheep farming way of life & tradition and the long time association and role it has played in shaping these mountains and their people. 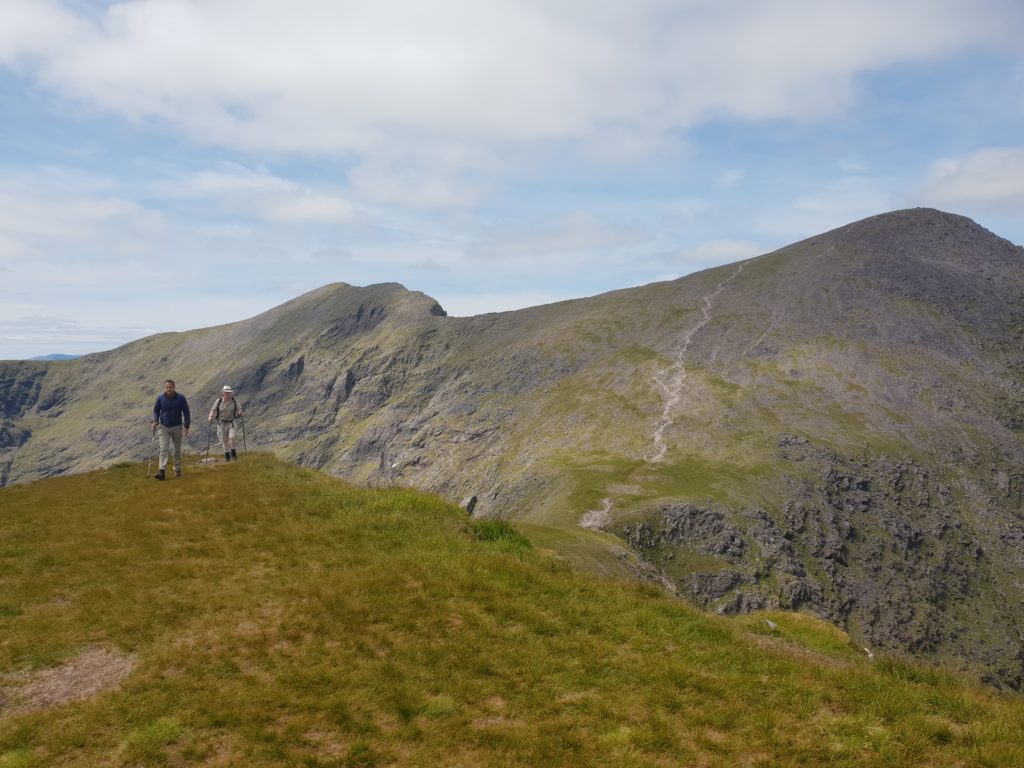 We rested often and took an extended break at the spectacular high loch of Coimín Uachtarach. Here I presented the Taoiseach with a copy of our book – MacGillycuddy’s reeks Winter Climbs and he was fascinated to flick through its pages and gaze in awe at the many photos of these mountains, cliffs, ridges and gullies plastered in ice and snow. Perhaps it may tempt him back to return some future winters day and complete some epic snow gully or ridge line!!!

After resting here at the position of the highest lake in the country it was time for the man holding the highest political position to continue even higher as we began our ascent of “O’Sheas”. We eased steadily up the loose rocky gully pointing out and highlighting the ever increasing far views west towards Loch Léin, the town of Killarney and the impressive peaks in between. It was a gorgeous sun shiny day and the views just got better and better as we scrambled the final rock step to finally emerge out onto the Binn Chaorach ridge with the breath-taking sight of Ireland’s 3rd highest – Cathairs towering Northface directly facing us now across the neighbouring spectacular high valley of Coum Loughra.

Another welcome rest and off again with an ever interesting rocky scramble as we traversed the high pinnacles soon passing above central gully and now the final 20 minute steep scramble for the summit. Views behind us now too of the shimmering waters of Dingle bay with the broad yellow expanse of inch strand jutting in from the right and the long slender spit of Rossbeigh strand on the left. I pointed out the whale like backbone of the Brandon massif, the Mish and the Blaskets tailing off the peninsulas end.

We neared the top, not far now. Views to the left of Cathairs summits now to the far outer reaches of Kenmare bay with the inlet of Sneem clearly visible. Beara beyond looking stunning as always with O’Sullivan stronghold and final bastion – Dursey Island, raising the subject of Donal Cam O’Sullivan Bere and his epic winter march north to friendly Leitrim after the disastrous Irish defeat at the battle of Kinsale of 1601.

The summit cross now reached and what a truly inspiring 360 view and what a day for Taoiseach Varadkars 1st time ascent!!! Congratulations all round. Other small groups also revelled in the spectacular scene, taking selfies and ringing grannies and mammies and updating their facebook status.

I gave the background to the summit cross, from the initial timber one erected in the 50’s to the present day metal structure. I told them of the memorable re-erection after it was maliciously vandalised a few years ago and of the great camaraderie and tough hard graft by the team who reinstated it. We enjoyed our well earned lunch while taking in the far and wide views West to Valentia, South to Kenmare, even the Galtys in the distant East were visible today. The Taoiseach recorded his weekly twitter message from the top, even giving KerryClimbing a little plug with his kind word of thanks for guiding and looking after him and his small party.

A few more sweets and treats and now time to descend. Our plan was for the Zig-Zags, first dropping down the well worn trail of the shoulder to the top of the Devils Ladder and then up to go down as we plodded up the boggy ridge to gain the flat summit of Cnoc an Toinne. Another rest and take in the views down into the western depths of the stunning Coimín Dubh – the Black valley. Electoral areas being mentioned now and the not too distant connection in the late 70s to the electricity network of this most beautiful remote mountain valley. We spoke of its vibrant community, its church, school, hostel and people, and of the many visitors which visit here to appreciate its beauty. I highlighted its status as a dark sky reserve and of the fantastic and potentially successful project to reintroduce the awe-inspiring White Tailed Sea  Eagle to this and other neighbouring valleys and lakes. 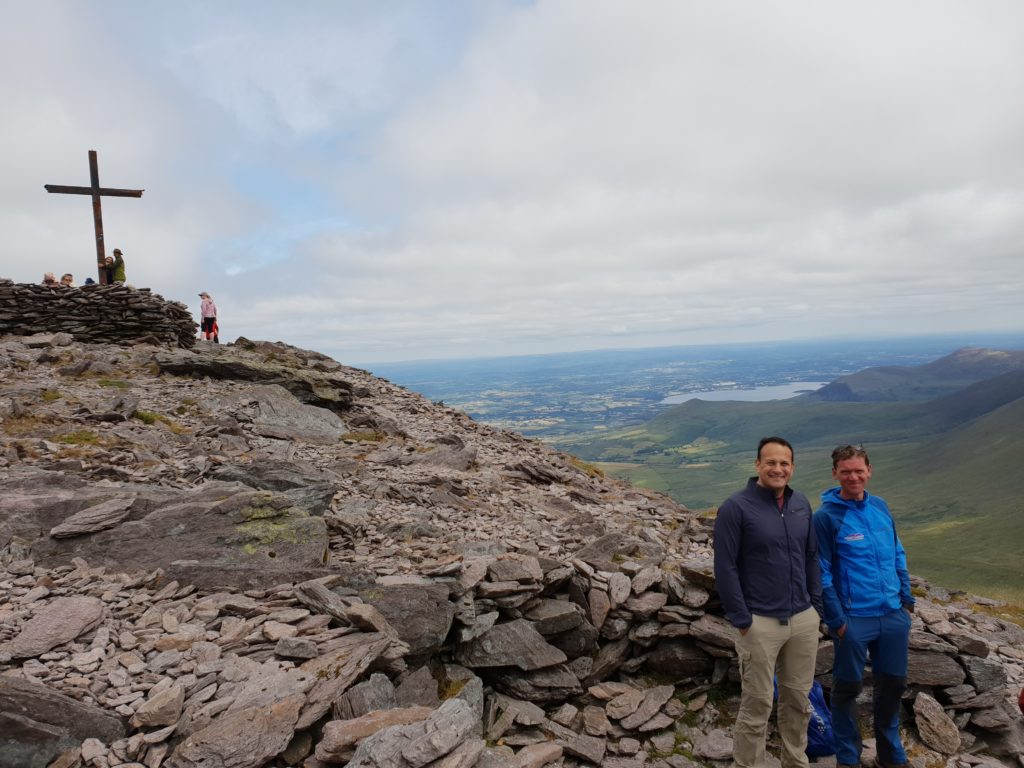 Carefully we descended the Zig Zags, highlighting its early use as a short cut over the mountains for people of the valley needing to travel to the bustling villages and towns beyond its northern mountain ramparts. Impressive views now of Corrán Tuathails jagged steep North face. We could pick out the faint trail high above the inky black waters of Loch Gabhrach which we had followed much earlier in the day as we headed for “O’Sheas” and now looking much steeper from this angle than it had felt those hours earlier as we scrambled its rocky steps. Impressed!!! Soon we neared the end of the Zig Zag trail, stopping to rest again and dish out the jelly worms!!!

Time was now ticking by rapidly. I was now hugely conscious that I “HAD” to be in the Gap of Dunloe by 4:30 to meet 8 adventurous clients and give one of our highly popular rock climbing courses…and was now 3:30!!! My little band of high profile V.I.Ps were aware of this too as it had been the main reason we had initially planned to meet and commence our trek that morning at 8:30!!! Sure that would be LOADS of time I had naively thought, not of course realising and appreciating that guiding the leader of our country was most definitely not your normal day. You can’t dictate ALL the stops and breaks on this one Piaras…!!! More information passed on and more discussion, more stories, caution and care on the loose rocky trail and another stop to take in the all to rare sun shiny views. We reached the valley floor and the easy straightforward trail leading out.

Reluctantly I said my goodbyes!

They would manage away fine from here without me as I now unfortunately needed to beat a hasty retreat back to Cronin’s. I couldn’t be late for my clients in the Gap and now needed to run the 3k out to make my ever tightening deadline. They thanked me for looking after and guiding them and appreciated the many tales and information which had added so much to their day. I thanked them too for the pleasure and honour of being tasked to look after their care. I am not into politics, I do keep myself well astride and informed, but this day was yet, just another hugely memorable one out of many. I was both privileged and honoured to get the opportunity to showcase my most favourite part of the world – the mighty MacGillycuddy’s Reeks mountains of county Kerry to the present serving Taoiseach and 1st time ascensionist Mr Leo Varadkar. Telling the tales, sharing my stories, providing the much varied and fascinating natural and human history aswell informing regards the many issues is what we are passionate about. 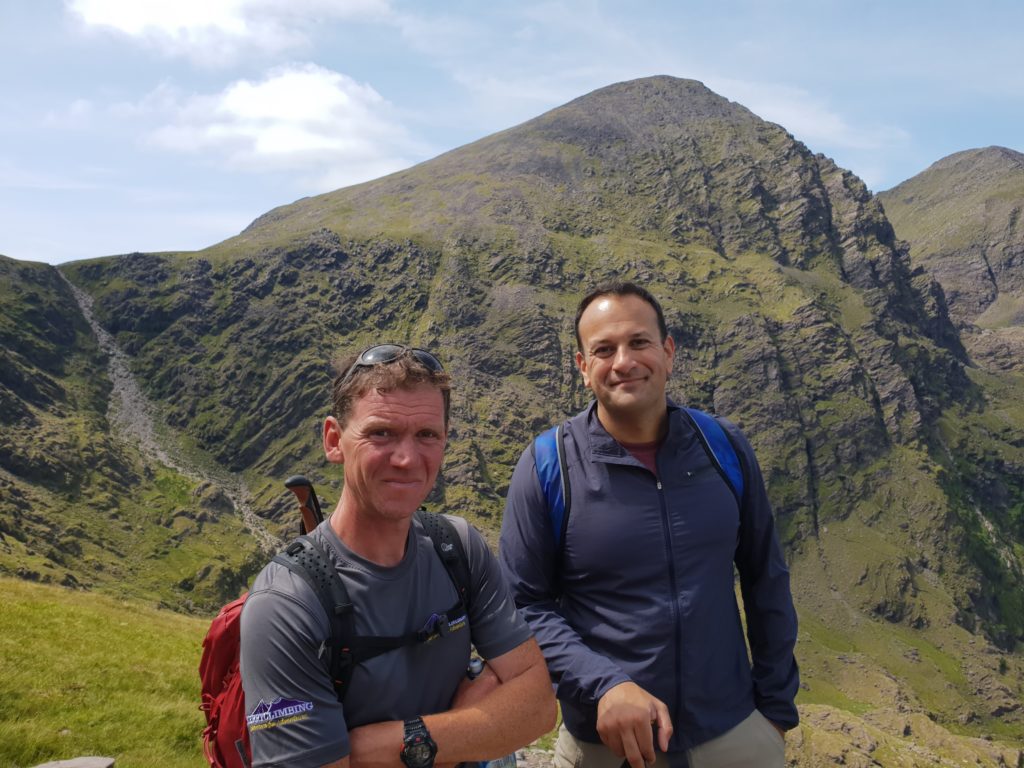 Before striking off on my run out the Glen the Taoiseach shook hands and said his thanks and presented me with a carefully wrapped small green box, emblazoned with a gold paper harp seal. A lovely gesture and I stuffed it in the side of my ruc sac to unwrap later.

Off I went, now with only 30mins to spare. I ran quickly, hoping that I wouldn’t meet anyone on the trail who had perhaps seen me guiding Taoiseach Varadkar earlier. What would they think as I flew by all sweaty and red faced?!? Had there been an accident? Had I lost them? Had I wiped them all out with his protection agents Beretta? (I wondered all day if he had one in his rucsac?!?)

Not to worry. I was running so fast no one would recognise me. Arrived back at Cronin’s. A quick hello to his two special branch drivers waiting. They’re a half hour away I promise!!! No need to worry here either as I’m sure they had already been well informed!

I made the Gap of Dunloe for rock climbing with time to spare. Panic averted. Clients not at the rendezvous yet. Time to prep the gear. Harnesses, ropes, climbing shoes, rack into ruc sac. Oh Yeah, the little green gift from the Taoiseach. Had forgotten about that. Wonder what it is? A specially engraved Rolex Adventurer maybe?  Miniature silver compass perhaps, a medal for outstanding contribution to Corrán Tuathail…??? Green paper torn aside and unwraps a shiny patent black box. I push the inner box out and emerge an impressive pair of bling silver cuff links decorated with gold images of government buildings. Cool!!! I barely own a shirt but cool all the same.

Chuffed with the unexpected and unusual keepsake and a reminder way down the line of a hugely memorable day in the mighty mighty Reeks.

I’ll have to pimp my rucsac 😉 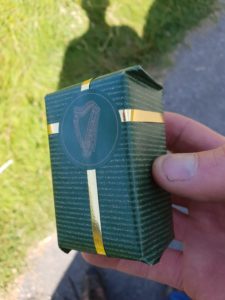 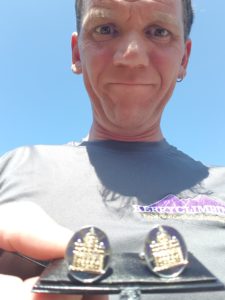