MY FAVOURITES OF MOUNTAIN LITERATURE….

“THE VILLAIN”
A fascinating, thought-provoking biography of a climbing legend.

Don Whillans has been an icon for generations of climbers. His first ascent of Annapurna’s South Face with Dougal Haston in 1970, remains one of the most impressive climbs ever made – a standard to which all contemporary Himalayan climbers aspire. But Perrin examines the tough reality behind Whillans’ formidable achievements – the character of the man himself. Despite his skill and daring, Whillans was a savage-tongued, hell-raising scrapper – turned down for a Queen’s Birthday honour, because of a violent fracas with the police. Coming out of a world miles away from the environment of the upper class climbers who dominated the sport, Whillans’ forceful, uncompromising personality gave him superstar status – the flawed heroism of a Best or an Ali

Joe Brown is one of the greatest names in British climbing. This book not only describes his many notable climbs, but reflects a most engaging personality with a highly interesting approach to his craft.
He was born in a Manchester slum, the youngest of seven children; his father died before he was a year old. The characteristics he showed as a child – a quite extraordinary self-reliance and an unexpected love of the countryside – are reflected throughout his life-story. The Hard Years is also the story of Joe Brown’s climbs up some of the toughest mountains in the world.
___________________________________________________
“THE WHITE SPIDER”
A true classic of mountaineering literature, this is the story of the harrowing first ascent of the North Face of the Eiger, the most legendary and terrifying climb in history. 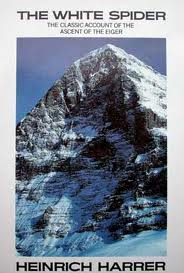 Heinrich Harrer, author of ‘Seven Years in Tibet’ and one of the twentieth century’s greatest mountaineers, was part of the team that finally conquered the Eiger’s fearsome North Face in 1938. It was a landmark expedition that pitted the explorers against treacherous conditions and the limits of human endurance, and which many have since tried – and failed – to emulate.

Armed with an intimate knowledge that comes only from first-hand experience of climbing the Eiger, Harrer gives a gripping account of physical daring and mental resilience.

The Cuillin, on the Isle of Skye, form the finest single chain of mountains in Britain, rising straight out of the sea to a height of over 3000 feet, and presenting a landscape of light and rapidly changeable weather.This award-winning volume of photographs and route descriptions by British photographer Gordon Stainforth, explores the savage beauty of this unique mountain region, and captures the essence of rock climbing and scrambling in this spectacular area.

Using over 120 full colour plates and accompanying text Gordon considers the special qualities that make the Cuillin unique; mountains rising sheer from the sea, a magical light, rapidly changing weather conditions….
The Cuillin, one of the most successful mountain books of its type ever to have been published in Britain, is now out of in print after seven print runs in thirteen years.


Climbing magazine said : “Stainforth evokes a huge range of moods, presented with rhythm and purpose in a beautiful progression of double-page spreads, designed entirely by the author, with an attention to detail rarely seen in mountain books.”

Feeding the Rat is the story of an extraordinary man: climbing legend Mo Anthoine, who found his greatest joy in adventures that tested the far limits of human endurance.

That passion for “feeding the rat” made him the unsung hero of dozens of horrifying epics in the mountains, including the famous ogre expedition that nearly killed Doug Scott and sir Chris Bonington. The book is also the story of the extraordinary friendship between Mo and adrenaline junky Al Alvarez – the distinguished poet, journalist and critic – whose deeply moving portrait of his longtime climbing partner is a true classic of climbing literature. A gem of a book..
_________________

“EXTREME ALPINISM”
Big, high routes at the edge of a climber’s ability are not the places for inventing technique or relying on old habits. Complacency can lead to fatal errors. So where does the hard-core aspirant or dreamer turn? The only master class in print, Extreme Alpinism delivers an expert dose of reality and practical techniques for advanced climbers. 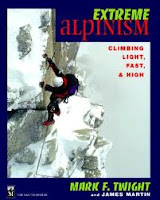 Focusing on how top alpine climbers approach the world’s most difficult routes, Twight centers his instruction on the ethos of climbing the hardest routes with the least amount of gear and the most speed. Throughout, Twight makes it clear that the two things he refuses to compromise are safety and his climbing ethics. In addition to the extensive chapters on advanced techniques and skills, Twight also discusses mental preparedness and attitude; strength and cardiovascular training; good nutrition; and tips on equipment and clothing. Illustrated throughout with full color photos.

WINNER OF THE BOARDMAN TASKER PRIZE 2008
“PSYCHO VERTICAL”
Metro magazine wrote that Andy Kirkpatrick makes Ray Mears look like Paris Hilton. Words like boldness, adventure and risk were surely coined especially for him. As one of the world’s most accomplished mountaineers and big-wall climbers, he goes vertically where other climbers (to say nothing of the general public) fear to tread.

For the first time, this cult hero of vertical rock has written a book, in which his thirteen-day ascent of Reticent Wall on El Capitan in California – the hardest big-wall climb ever soloed by a Briton – frames a challenging autobiography. From childhood on a grim inner-city housing estate in Hull, the story moves through horrific encounters and unique athletic achievements at the extremes of the earth. As he writes, ‘Climbs like this make no sense … the chances of dying on the route are high.’ Yet Andy, in his thirties with young children, has everything to live for. This is the paradox at the heart of the story.This book – by turns gut-wrenching, entertaining and challenging – appeals to the adventurer in all of us.
Show More
Show Less
__________________________________________________
Show More
Show Less

In 1950, no mountain higher than 8,000 meters had ever been climbed. Maurice Herzog and other members of the French Alpine Club had resolved to try.

Their goal was a 26,493-foot Himalayan peak called Annapurna. But unlike other climbs, which draw on the experience of prior reconnaissance, the routes up Annapurna had never been analyzed before. Herzog and his team had to locate the mountain using sketchy, crude maps, pick out a single, untried route, and go for the summit. Annapurna is the unforgettable account of this dramatic and heroic climb, and of its harrowing aftermath. Although Herzog and his comrade Louis Lachenal reached the mountain’s summit, their descent was a nightmare of frostbite, snow blindness, and near death. With grit and courage manifest on every page, Herzog’s narrative is one of the great mountain-adventure stories of all time. 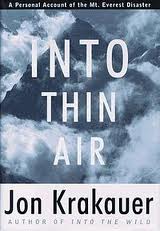 When Jon Krakauer reached the summit of Mt. Everest in the early afternoon of May 10,1996, he hadn’t slept in fifty-seven hours and was reeling from the brain-altering effects of oxygen depletion. As he turned to begin the perilous descent from 29,028 feet (roughly the cruising altitude of an Airbus jetliner), twenty other climbers were still pushing doggedly to the top, unaware that the sky had begun to roil with clouds…

Into Thin Air is the definitive account of the deadliest season in the history of Everest by the acclaimed Outside journalist and author of the bestselling Into the Wild. Taking the reader step by step from Katmandu to the mountain’s deadly pinnacle, Krakauer has his readers shaking on the edge of their seat. Beyond the terrors of this account, however, he also peers deeply into the myth of the world’s tallest mountain. What is is about Everest that has compelled so many poeple–including himself–to throw caution to the wind, ignore the concerns of loved ones, and willingly subject themselves to such risk, hardship, and expense?

Written with emotional clarity and supported by his unimpeachable reporting, Krakauer’s eyewitness account of what happened on the roof of the world is a singular achievement 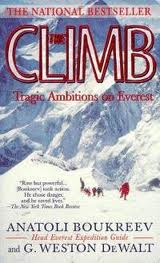 If you read “Into Thin Air” then you gotta read this!!!

In May 1996 three expeditions attempted to climb Mount Everest on the Southeast Ridge route pioneered by Sir Edmund Hillary and Tenzing Norgay in 1953. Crowded conditions slowed their progress. Late in the day twenty-three men and women-including expedition leaders Scott Fischer and Rob Hall-were caught in a ferocious blizzard. Disoriented and out of oxygen, climbers struggled to find their way down the mountain as darkness approached.

Alone and climbing blind, Anatoli Boukreev brought climbers back from the edge of certain death. This new edition includes a transcript of the Mountain Madness expedition debriefing recorded five days after the tragedy, as well as G. Weston DeWalt’s response to Into Thin Air author Jon Krakauer. 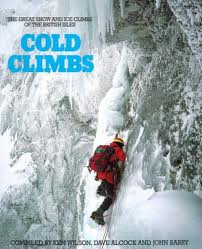 The classic picture book for anyone with an interest in winter climbing in Britain. Although climbing standards have risen, the writing and photos in this book are as inspiring as ever. As a tick list or as a way of recalling great days out this book has not been beaten. A must for all aspiring hardmen and novices alike.A fantastic coffee table book to possess…

In the Himalaya in 1997 Andy Cave achieved one of the hardest climbs ever recorded on one of the steepest and most difficult summits of the world – the north face of Changabang. Seventeen days later, he and two of his teammates – his best friend had already perished in an avalanche – crawled into basecamp, frostbitten and emaciated.

His account of this terrifying experience provides a dramatic climax to this extraordinary story. Learning to Breathe is, first and foremost, a lively and humorous memoir, written with energy and insight, about two very different groups of men, each navigating equally inhospitable worlds. Finally, on a larger scale, it is an examination of our ability to draw on inner strengths and the strengths of others.

Joe Simpson and his climbing partner, Simon Yates, had just reached the top of a 21,000-foot peak in the Andes when disaster struck. Simpson plunged off the vertical face of an ice ledge, breaking his leg. In the hours that followed, darkness fell and a blizzard raged as Yates tried to lower his friend to safety. Finally, Yates was forced to cut the rope, moments before he would have been pulled to his own death. 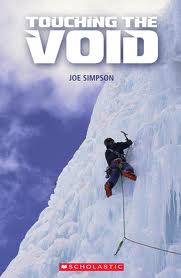 he next three days were an impossibly grueling ordeal for both men. Yates, certain that Simpson was dead, returned to base camp consumed with grief and guilt over abandoning him. Miraculously, Simpson had survived the fall, but crippled, starving, and severely frostbitten was trapped in a deep crevasse. Summoning vast reserves of physical and spiritual strength, Simpson crawled over the cliffs and canyons of the Andes, reaching base camp hours before Yates had planned to leave.

How both men overcame the torments of those harrowing days is an epic tale of fear, suffering, and survival, and a poignant testament to unshakable courage.

Ron Fawcett is a natural-born climber. In 1969, while still at school in his native Yorkshire, he tied into a climbing rope for the first time and was instantly hooked. From that moment on, it seemed nothing else in his life mattered nearly as much as his next vertical fix. Ten years later, Fawcett was the most famous rock climber in Britain and among the best in the world, part of a new wave whose dedication to training transformed the sport, pushing standards further and faster than ever before – or since. 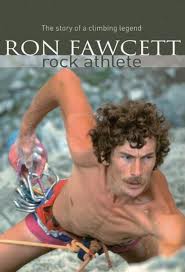 His legacy of new climbs ranks him alongside the very best in the history of the sport. He was also the first to style himself a professional rock climber, starring in the landmark television documentary “Rock Athlete”, and appearing on the covers of magazines around the world. But far from enjoying the fame, Fawcett found the pressures of the limelight too much to bear, and at the end of the 1980s he faded from view. Now, for the first time, he tells his extraordinary story, of how his love of nature and the outdoors developed into a passion for climbing that took him to the top – and almost consumed him.
___________________________________________________
Show More
Show Less
Show More
Show Less
PrevPrevious
NextNext
×