Yesterday was another day spent in the Reeks and boy it was a damp one I tell ya!!!

I was taking 2 great lads, Ian and Andrew from the South East up a route they’d had in mind for a while,the mighty Howling Ridge on Corrán Tuathail .

Howling Ridge is a steep and well defined rock climb/scramble which cuts straight up the North face and is considered a somewhat “Classic” Irish Mountaineering route. It is generally graded V Diff in summer though the crux moves can definitely feel more difficult in the wet and goes at various grades in Winter,depending on conditions. It was first climbed in the February of 1987 by two local lads Con Moriarty and John Cronin in full Winter conditions.


I’ve been lucky to climb it in all manner of conditions : in scorchio weather, in perfect hard snow and neve, not too forget a mini epic dealing with terrifying black verglassed rock. Climbed it in muddy slush, in mist and fog, drizzly rain and of course side ways rain. I’ve climbed it at night while it covered in snow and one fond memory is soloing it with a good mate on a  fine sunny day and loved it so much we ran back down to the Heavenly Gates and climbed up it again….sure why not…though the roped party we had scampered past first time round looked with little amusement as we bounded past for a second time grinning from ear to ear like ejits!!!
Even soloed it one time on a moonlit night with a mate and we bivyed way up the route on the face, tucked snuggly in our bags behind a boulder, (even enjoyed a bottle of Heineken as a wee night cap) and climbed on in the morning by sunrise…Superb!!! 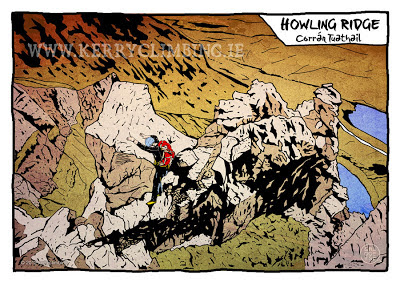 OK…you can slate it if you like… It’s as loose as hell…I have recently begun noticing looser sections that I don’t remember previous, due no doubt to the colder Winters and wetter summers and also more traffic I suppose.
“Mountain Jenga”- I call it…just waiting for some unsuspecting fool to tug on the wrong one and bring the whole flippn’ thing tumbling down. But hey!… the Alps are bloody loose too you know!!! 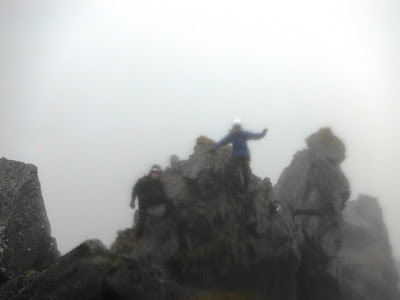 Howling Ridge is a great oul route….I love it….I really do..! Unlike our near neighbours in Wales and Scotland unfortunately the Irish “Mountaineer” was dealt a weaker hand… geologically so to speak… We just don’t have a whole lot of multi-pitch mountaineering/scrambling/ routes so let’s just accept it that no matter what the weather or whatever the conditions….with good company (or even just on your own…), Howling Ridge is a fantastic, exciting and superb day out….Just ask Ian and Andrew!!!! 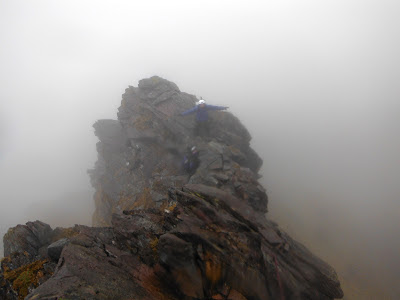