One thing about working as a guide for a living is how much wear and tear your gear receives. Climbing Ireland’s highest mountain on average 3-4 times a week really takes its toll on all your gear but nothing more so than your boots.

To tell the truth my last two pairs have only lasted me around 12 months each and they’re not the cheap ones by any means. Obviously the soles are the thing that wears out first. The uppers I’ve absolutely no problem with once I make the effort to rinse, dry and wax after each outing.  I’ve actually got a fantastic pair of Meindls sitting in a box under the stairs for the last 8 months still waiting to be posted off to get them resoled with new Vibram soles. But it’s not cheap!!! In fact it’s about 100 quid including postage just to get this done, which of course is cheaper than a buying a brand new pair but it’s still a hell of alot of cash. It also takes a few weeks before they are returned and hense when I need my boots on a regular basis it’s just not feasible until I’ve another pair to substitute.
So with this in mind I popped into my local gear retailer – Kerry Outdoor Sports in Killarney to invest in a new pair of boots.

The gang in Kerry Outdoor Sports really know their stuff. They know what I do for a living and leisure and they know what is required of my gear.

“Comfort” was number one.
I would be wearing these for anything up to 30 hours a week so they really needed to be super snug and super comfy. They needed to be light enough to be worn for long periods but without skimping on toughness.

Next was “Durability and Stability”.
I would be travelling on,over and across all manner of ground type and terrain. From sloppy soft bog and mud to razor sharp scree & rock. Now I wasn’t shopping for a technical boot. It wouldn’t be required to take crampons and I didn’t want an over stiffened sole but this said I didn’t want the soles to be too flexible either.
Climbing, scrambling, slogging and bog-trottin’ I needed these boots to withstand it all.

Next up was “Fabric type”.
To avoid premature breaking down of the stitching due to the highly acidic boggy nature of our uplands I needed a boot with a full leather upper as well as minimal seam lines.
“Waterproofness and Breathability” of course was also a major factor here. A Gore-Tex lining would be an advantage as wet or even dampish feet quite simply was NOT an option and this meant ALL year round.
Rain, hail,and snow to splitting sunshine in my shorts!!!  .


So with ALL these factors in mind and with the super assistance of the gang In KOS I came away with a pair of boots that seem to tick all the boxes and they are the Zamberlan Vioz GT’s. Not quite sure what the “GT” is all about. Sounds more like the fake sticker on the back of a boy racers Corolla!!!

Now time for the Big test!!! 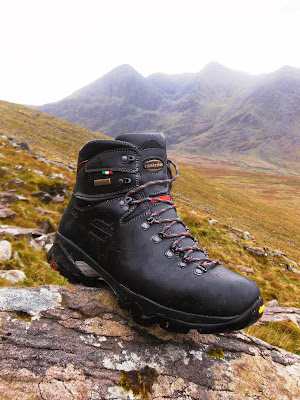 There is no real “breaking in” required with these boots and seeing as I’d a bit of free time before I was due to collect my daughter from school at 2, I quickly packed a small ruc-sac, grabbed the new boots from their box, and struck up into the Hags Glen behind my house with the aim of giving my new purchase a FULL ON try out!!!

Spent a rewarding few hours doing a small circuit of some of Ireland’s highest tops in the MacGillycuddy’s Reeks Mountains of Kerry. Firstly I headed up a rugged sandstone ridge known locally as “The Bone” to the summit of An Maolán Buí (973mtrs). The terrain on this long rocky ridge was spot on for gauging how the Vibram soles dealt with ascending wet and slippery grade 1-2 scrambling ground. No complaints whatsoever…Absolutely perfect!!!
I was moving extremely quickly and the stiffness and aggressive traction of the soles gave me a confidence to move at the rapid pace I required. From Maolán I jogged the short distance to the lovely summit of Cnoc na Péiste.
The boots honestly felt as comfortable as my trail-runners!!! 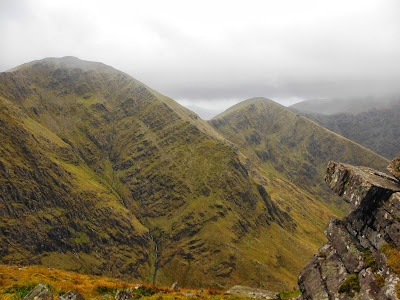 From here it was time to up the ante and test them even further by heading onto one of Ireland’s very best high mountain scrambling routes, the short but satisfying airy knife edge “Coimín na Péiste Ridge”  to the rocky peak called the “Big Gun” and then onto the impressive lofty summit of Cruach Mhór (932mtrs). All down hill from here. Time now 11:20. Pressure is off as I know I will easily be back to do the school collection. Lots of steep rock to scramble over though on the descent as well as some scree to negotiate before then facing a 2km squelchy bog-trot back to the car.

Arrive back at for 12:30 nicely satisfied. Feet and socks are still bone dry. All the boxes remain ticked and I’m happy though my knees hurt a little…!!!
Now off on the school run.. 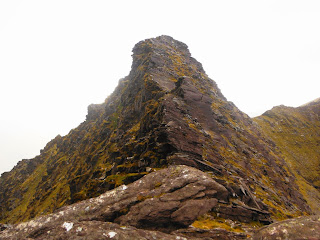 Waterproofness and Breathability : Yes and Yes….

Have since worn these in the mountains on three further consecutive days, one of these being a horrible wet and dreary one and still extremely happy with how they perform.

The Zamberlan 996 Vioz GT Boots are priced at €205 and are available from :

Noticed a bit of scuffing alright on the toes of each boot, this probably due to the lack of a rubber protective rand around the toe area of the boots. Still though I had just completed almost 2 kilometres of steep continuous scrambling and as the boots were of leather, I was satisfied that with my usual post activity care and waxing would avoid this becoming an issue.
Still no getting away from the fact though that rubber around the toe would definitely have improved these boots even more but still a superb boot.