Winter Skills and yet ANOTHER Curve Gully Ascent…. 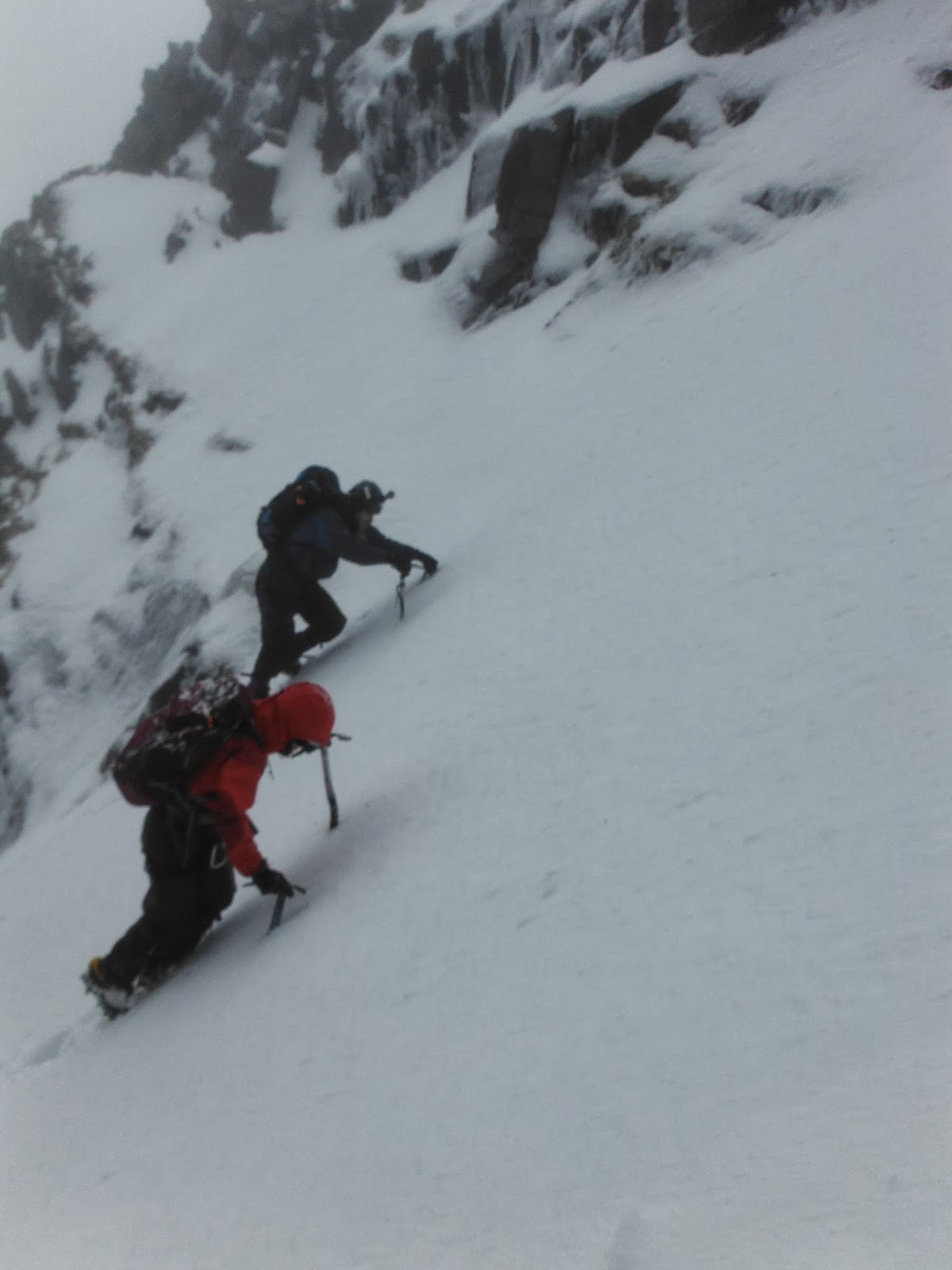 It’s been an absolutely a fantastic season of Winter Climbing and Mountaineering in the MacGillycuddy’s Reeks which has allowed us run a few of our all too rare 1 day Winter Skills courses.  The latest one of these was yet again spent climbing the deep snow filled Curve Gully high on Corrán Tuathail with Zane from Cork and Aine who’d travelled down especially from Galway and was overjoyed that she did!!!

The day began showery enough but started brightening nicely as we made our way up to the first level underneath Corrán.

We spent a highly informative hour at the base of Curved learning lots of bits and bobs from Movement skills on snow, self-belay, self-arrest, Avalanche awareness, belaying using the rope alone as well as with a sling and krab, Constructing and using snow anchors such as buried axes and a Deadman Anchor.
Extremely cold with wind-chill making it feel well into the minus temps so didn’t hang about here too long before heading up the gully and getting the blood flowing again. Topped out onto a cloudy summit in a strong biting cold wind within a few minutes it cleared for just long enough to grab a few impressive photos.

Descended easily down the Devils’ Ladder and finished a great day with Coffee and Cake in Cronins’ Tea-room. 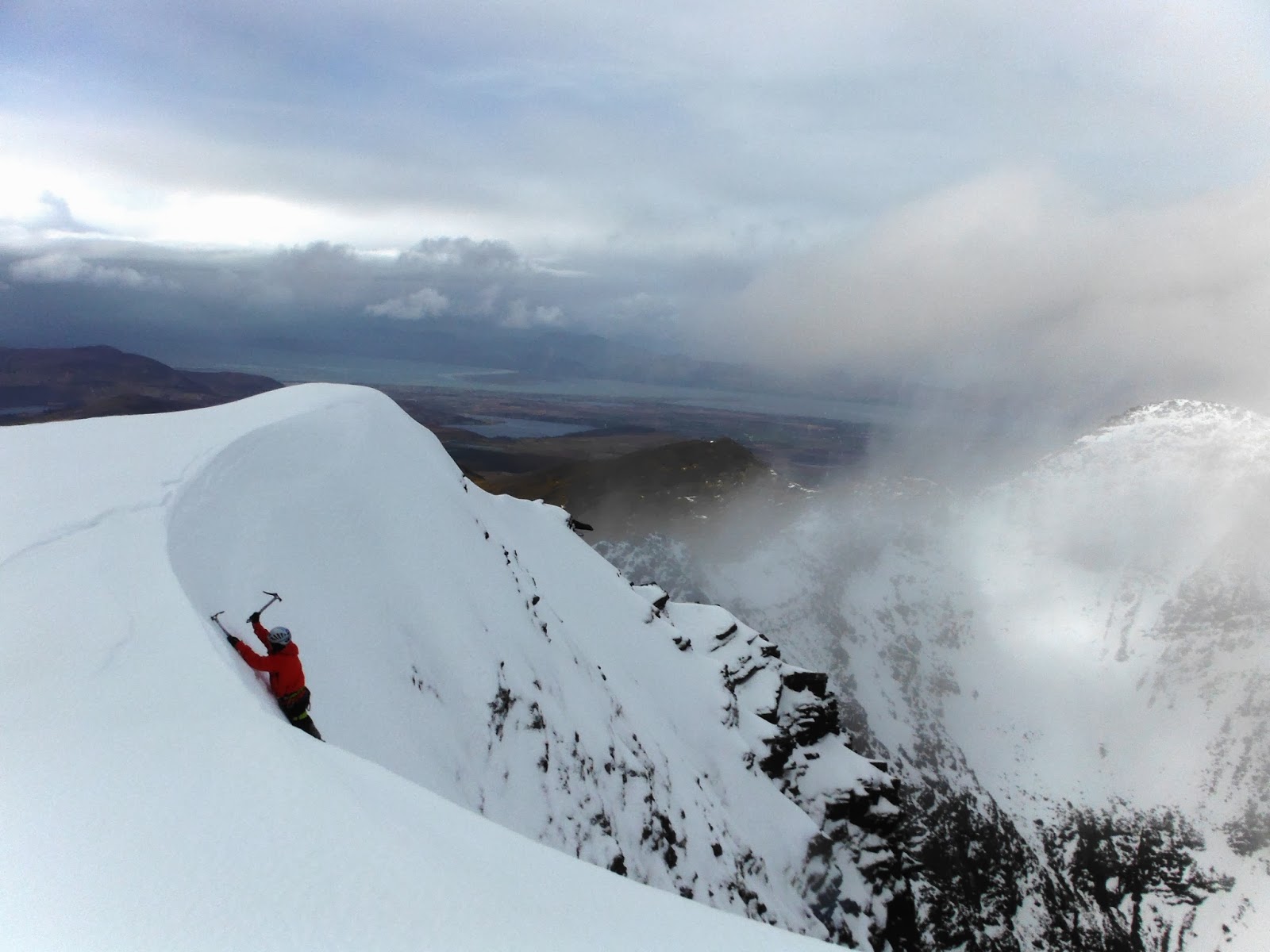 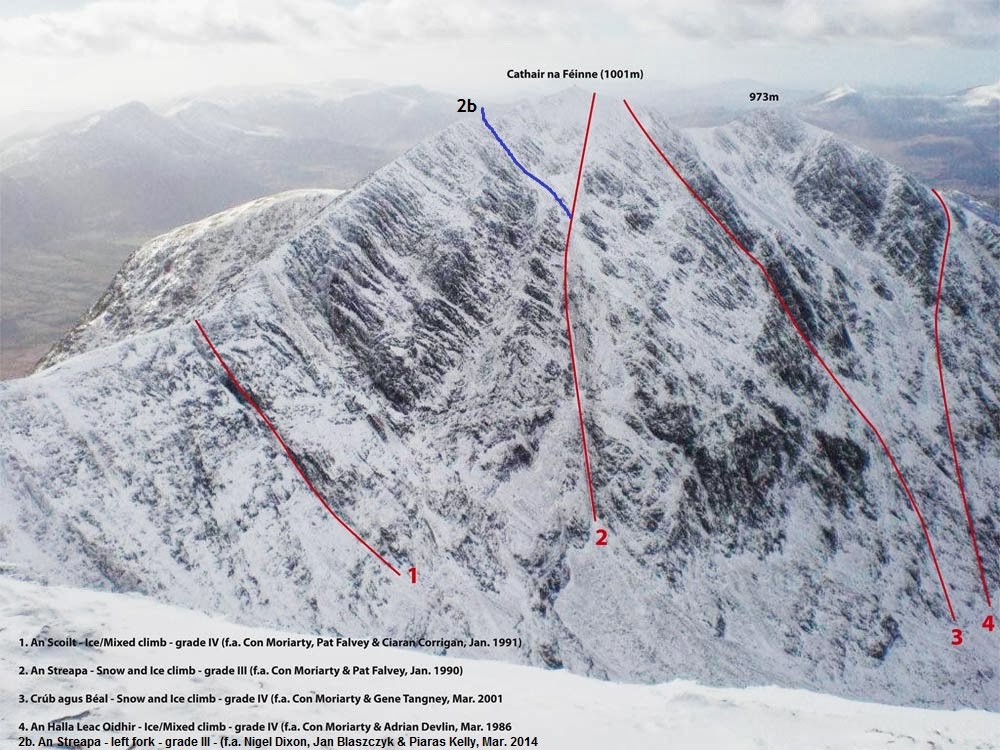 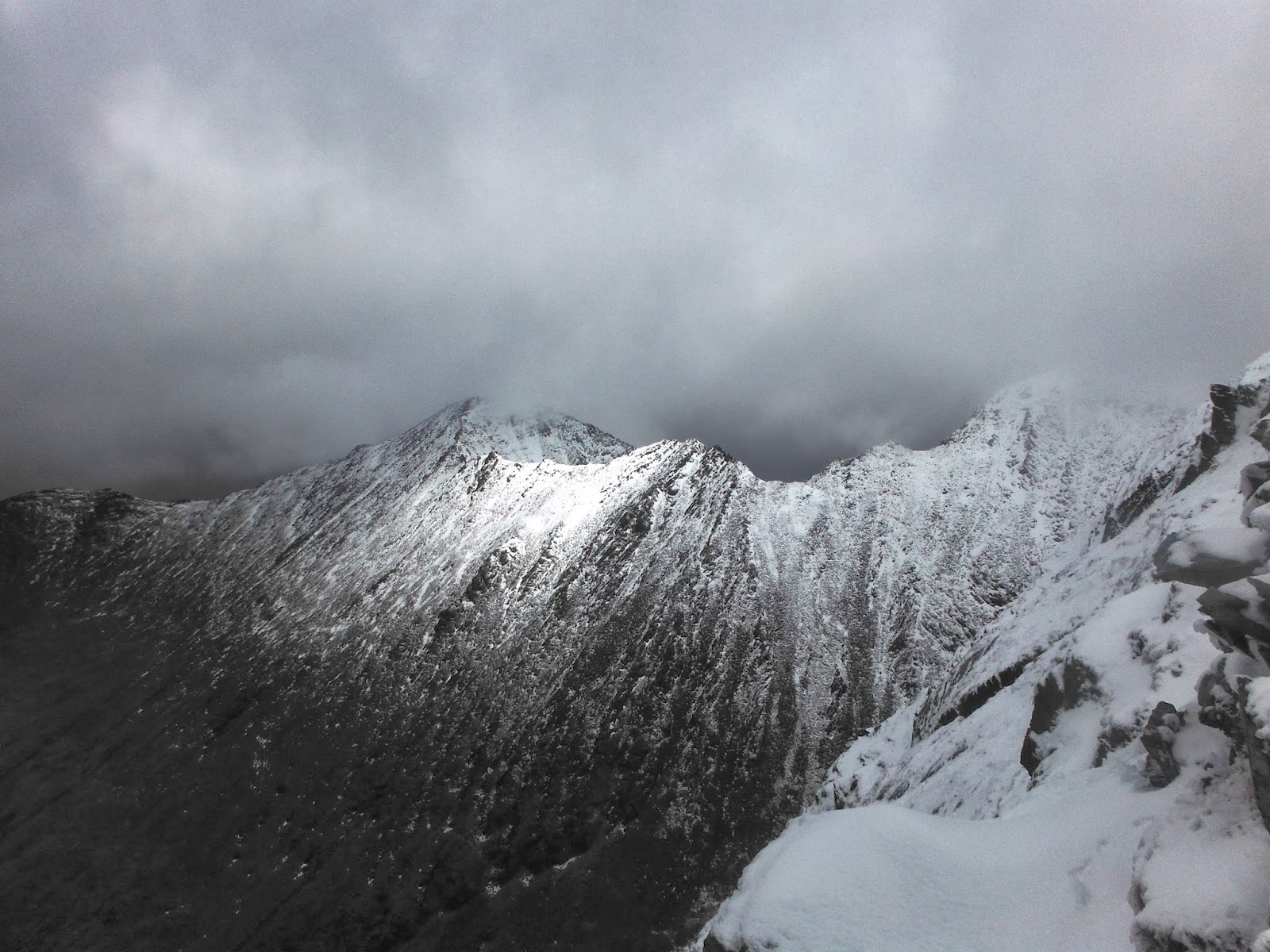 Headed to Coomloughra recently with Jan and Nigel to climb a 250mtr long snow gully running up the entire length of the North face of Caher.  My eyes had been drawn to this line just the previous day as I stood on the summit of Corrán Tuathail after topping out from Curve Gully on the forementioned skills course.

Slogged up the long

approach to the impressive glen from the Hydro road in yucky drizzle and after grovelling up a few initial short but extremely steep wet, slimy and sloppy waterfall pitches we finally hit the snow line and though very soft and cruddy in the lower section, the top 100mtrs was truly superb and we topped out on the summit of a calm Wintery Caher just as the cloud cleared.

Well spent another 2 days last week working in the Reeks and what a change in 24 hours. Friday was a gorgeous but cold day spent high up on the rocky pillar of Stumpa an tSaimh more commonly known as “The Hags Tooth” assisting a filming company with a shoot for an advertisement. Spent most of the day sitting high on the Tooth dressed in tan leather jacket and jeans while acting as a body double.   A truly stunning day in the mountains with little or no cloud and only a slight but extremely cold breeze. 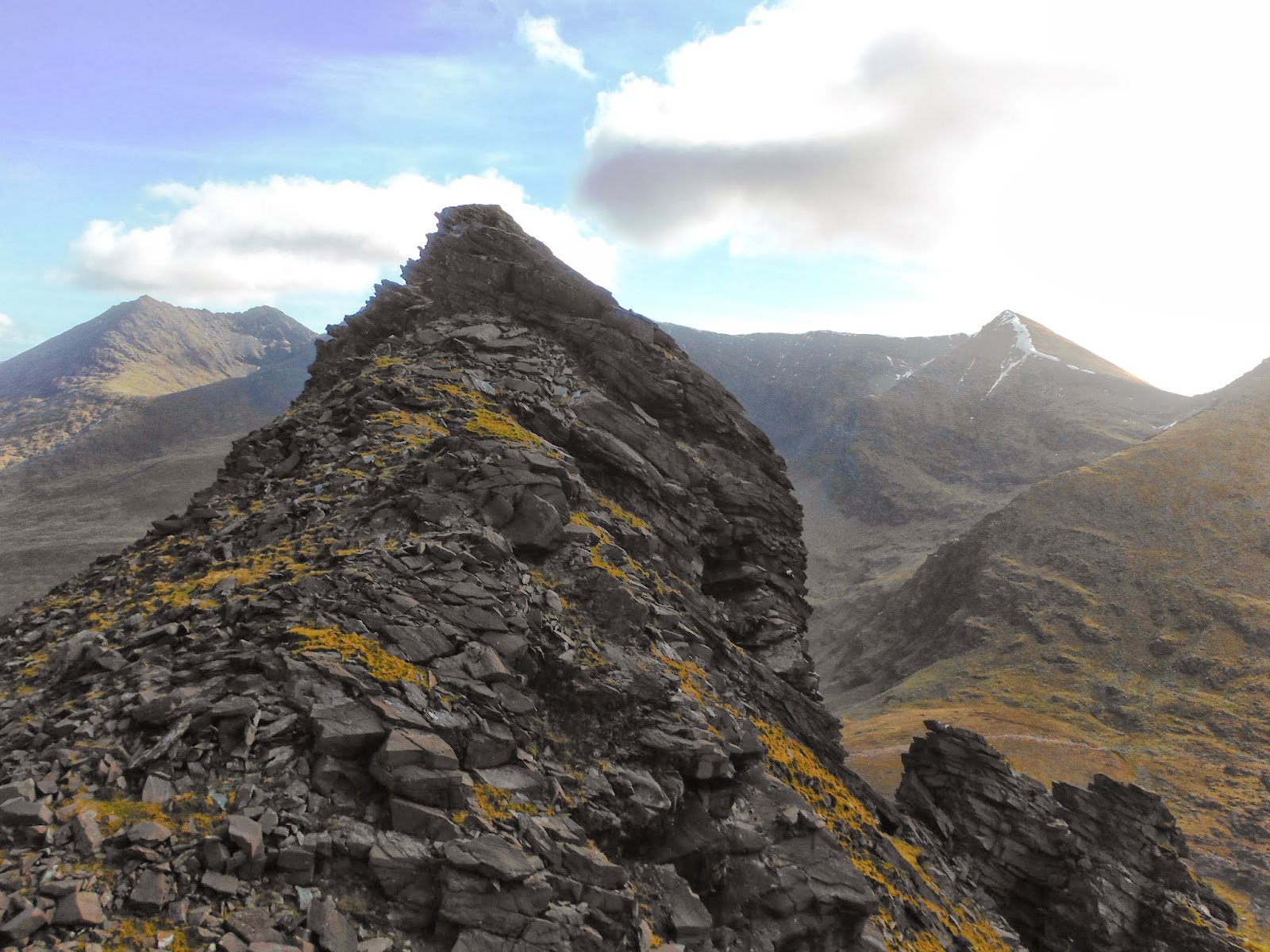 Saturday it was back to more normal stuff guiding 5 in high winds and side ways rain!!! Some extreme gusts down low had me worry for a while that we may not reach the top but we persevered none the less and winds actually decreased as we got higher and so Esther and Jimmy,our visiting honeymooning couple from Dallas Texas and Orla, Anthony and Bríd from Roscommon had a wild exciting ascent in at times “testing” conditions.

Spring has well and truly “Sprung”!!!
What an absolutely phenomenal day out in the Reeks yesterday guiding Siobhan and Vincent from Meath to the summit of Corrán Tuathail in tremendous long awaited sunshine. 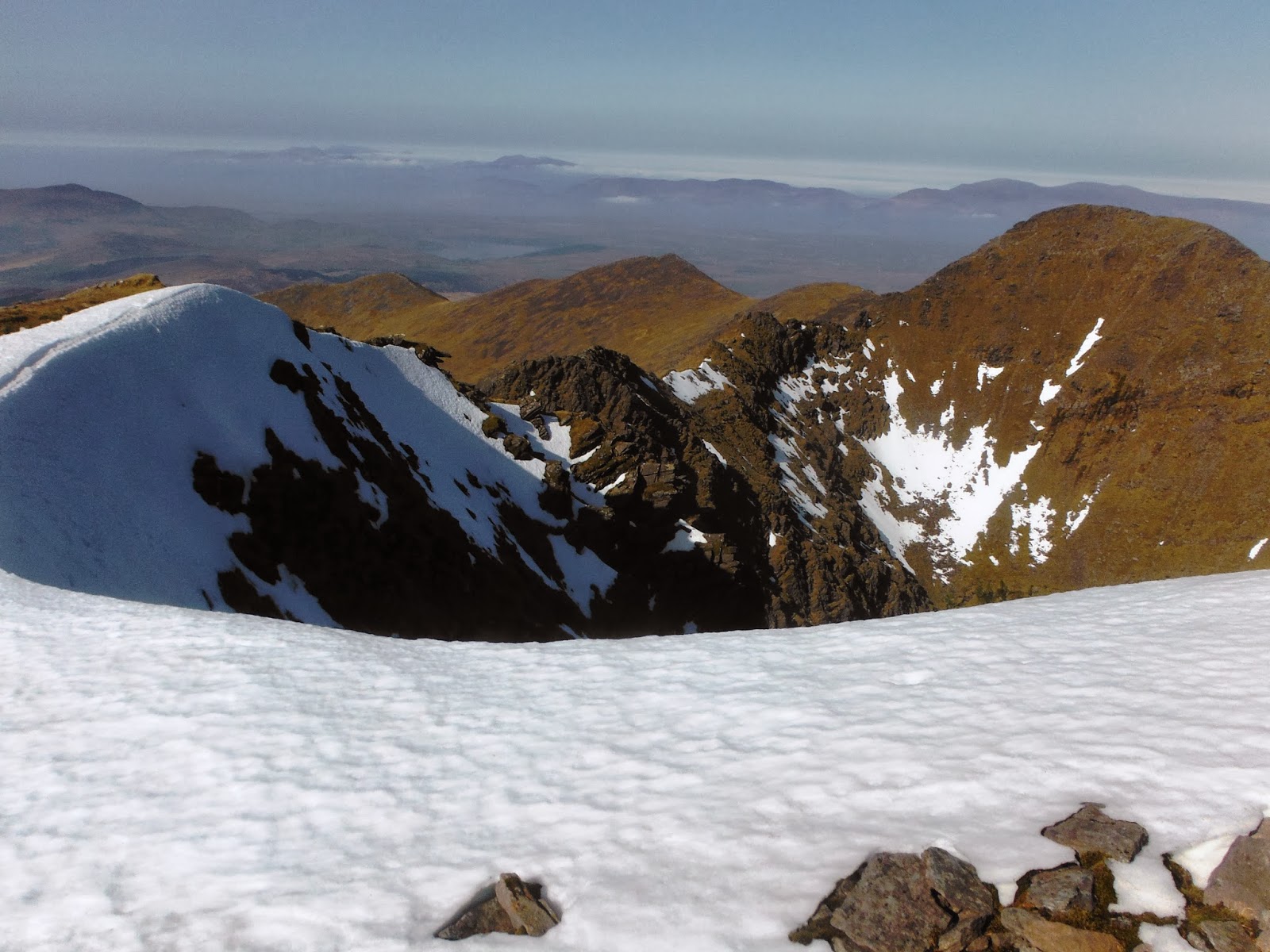 Not even a single wisp of cloud in the sky and hard to believe that little over a week ago I was dressed for battle with axes and crampons and Winter climbing in these magnificent mountains with hands on fire with hot-aches and 4 days ago I was knocked to the ground and bruised by ferocious winds while tackling the same very route as todays!!!
Well that’s Ireland for you….ALWAYS interesting 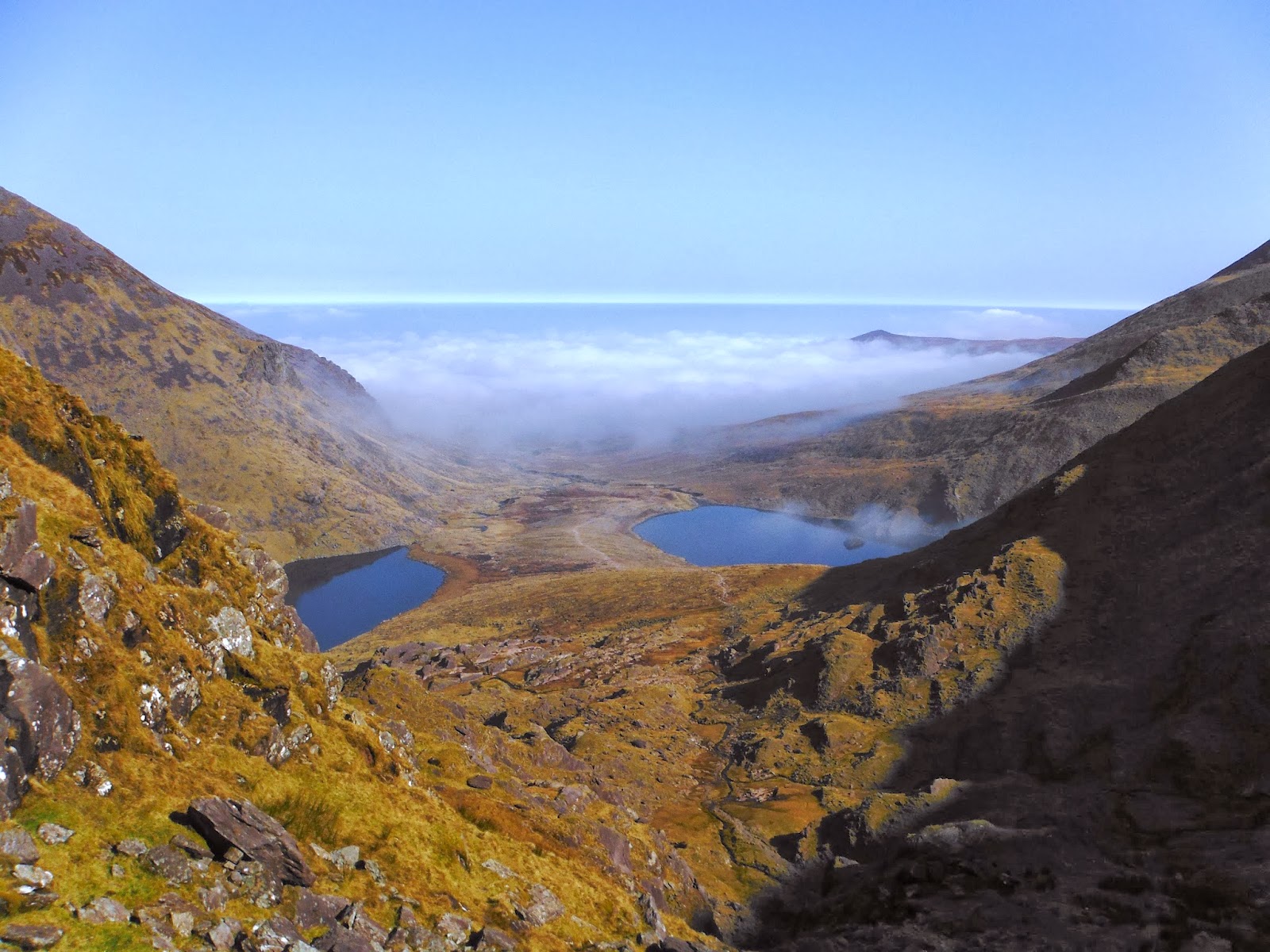 We climbed via the Devils Ladder and had the summit all to ourselves before leisurely making our way back to Cronin’s yard via the “Zig-Zags”.

The gang had a wonderful & spectacular day and witnessed the Reeks in all their splendour and glory. 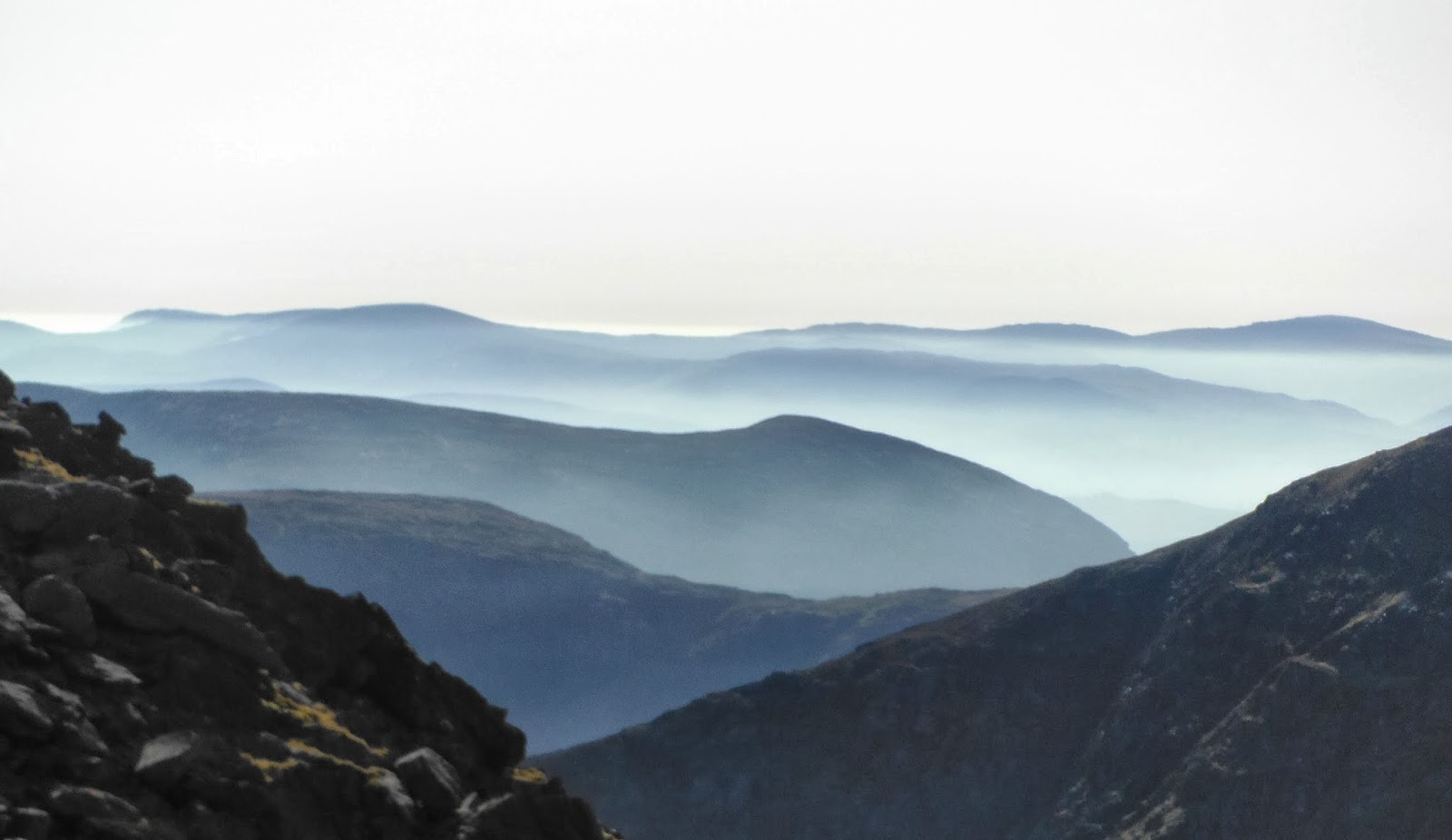 What an unbelievable day for a first time ascent of Irelands highest….Jammy feckers!!!