Sunday July 22nd had finally arrived for Philip and Scott from county Cavan and their guided attempt of the FULL circuit of the Hags Glen (Com Caillí),set in the heart of the magnificent MacGillycuddy’s Reeks mountains of Kerry. 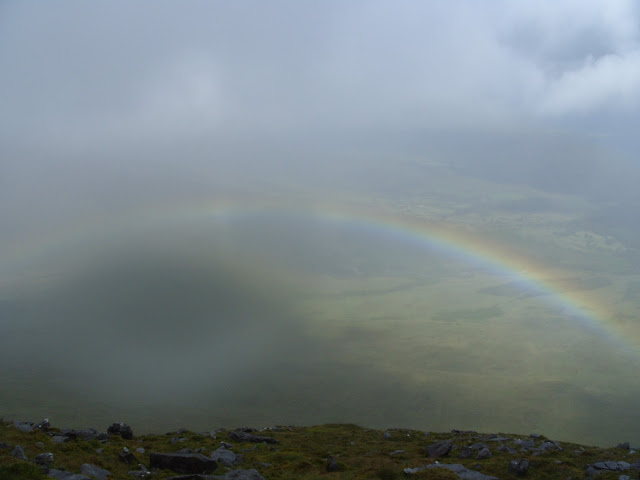 Forecast was giving very cloudy conditions, possibly some light drizzle with winds freshening later in the day….Far from perfect but could always be worse….especially with the summer we’ve been having!!! At least we’d be long past the airy Cumeenapeasta ridge before the wind strenghtened!!!
We got away from Cronin’s yard quick enough and although the soggy wet ground did slow the pace, we were happy to be on our way and made good progress on Cruachs lower slopes. An hour or so in and by the time we reached the rockier sections, the wind had ALREADY began to increase in strength and great care had to be taken on the treacherously slippy wet lichen covered rock…..The sheer strength of the gusts on the slog up the steep rocky slopes of our first mountain of the day “Cruach Mhór”, left us in no doubt that on finally reaching the shelter of its summit grotto we would be making the call to abandon our attempt….
Far far too dangerous to be tackling a route like the exposed “Big Gun – Cumeenapeasta” ridge!!!!
Upon reaching the shelter of the grotto we met two other lads who had travelled down that morning from Carlow with the same objective as ours and they too had decided to beat a hasty retreat back down to Cronin’s…
Winds of this force not forecasted and Philip and Scott will be back again soon for another crack at it.
The mountain will always be there!!!
To be continued………..

Last Wednesday we guided a group of four from Cork up one of Ireland’s very best mountaineering routes, the magnificent Howling Ridge on Corrán Tuathail…
Howling Ridge is a steep, well defined route which cuts up the north-east face of Carrauntoohil. It is graded V Diff in summer and goes at various grades in winter, depending on conditions.
It was first climbed in February 1987 by two local climbers, Con Moriarty and John Cronin, in winter conditions. Moriarty, who led the climb, was an experienced mountaineer who four years previously had made the first ascent of Primroses Ridge – the hardest route up Carrauntoohil. He had just recently returned from a winter climbing expedition to Scotland and wanted to prove that challenging ice climbing could also be found in Ireland in the right weather. The route gets its name from Moriarty’s dog, Grimsel, who waited at the Heavenly Gates howling while the pair completed the climb.

We met at Cronin’s Yard bright and early or should I say “misty” and early as the cloud level was right down to our toes!!!! Considering everyone was carrying a heavier pack than normal with ropes, rack etc,etc the walk in to route went quickly enough and before long we were gearing up at the lofty shelf called the “Heavenly Gates” and roping up for our objective…. 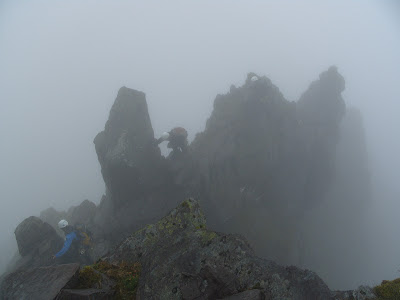 We climbed in two ropes of 3 and broke the climb up into  short 20 metre pitches which worked out a treat as it avoided any problems of rope drag, difficulty in communication and idle time waiting at anchors and on belays. Rock on the route was of course wet due to the previous days rain but the day itself surprisingly remained dry with some light rain and drizzle falling only on our descent but unfortunetly no views whatsoever today!!! 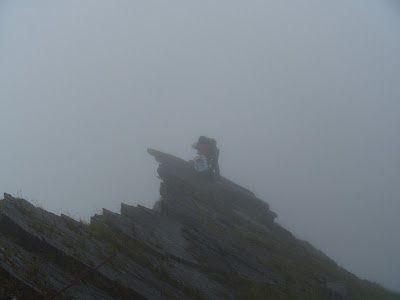 On reaching Corrán Tuathails summit  we were met by a group of ten teenagers who apart from having no idea of which way to descend, possessed NO map (never mind compass), were very badly equipped and clad in trainers !!! The most annoying thing was that they had absolutely no regard for the unspoilt beauty of this wonderful place. The summit was strewn with litter and rubbish which they blatantly dropped in front of me as they departed even after I pulled them on the fact.
After they had all left, swearing to myself, I bagged what litter they had left behind and packed it into my ruc-sac……
After approx 20 minutes we met this very same group now in a huddle on the descent path….I wanted to avoid any contact as my urge was to run over and ram the rubbish I’d collected down their throats (littering is my number one pet hate in this world !!!), but  my mate Mick had told me to keep calm and just keep walking, which I did….Pretty quickly Mick now alerted me to the fact that one of the teenagers had fallen and needed assistance…It turned out he’d been RUNNING down the descent path (in trainers remember) and had slipped, badly wounding his head, injuring his wrist and hip… (Bad Karma perhaps for littering !?!?!?)… Anyway  he was fine and we made him as comfortable as possible,administerded first-aid and waited for the Mountain Rescue team to arrive….while I gave the remaining group a wee lecture on “Leave no trace”. 😉
Mick guided the rest of the teenagers aswell as our group of clients down the mountain and I prepared myself for the long evening ahead…. 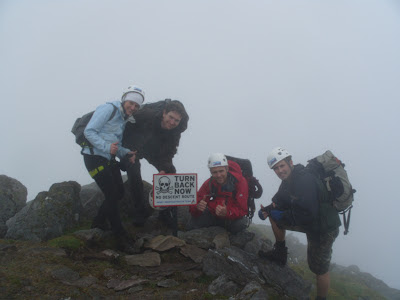 Congrats and a fantastic well done to David, Norma, Neil and Damien for climbing so well on the day considering the dampish soggy conditions..