The renowned Hag’s Glen must truly be one of the most spectacular valleys in Ireland’s superbly impressive and rugged range of mountains – the breath-taking and utterly awe-inspiring – Na Cruacha Dubha, Kerry’s MacGilliycuddy’s Reeks. It is approximately 4km in length, little over half a kilometre wide and surrounded by a great cirque of majestic towering mountains, the highest peaks in the entire country, with the majority being well over 3000 feet and culminating in the perfect pyramid of Ireland’s highest -Corrán Tuathail / Carrauntoohill 1040m.

The Glen is a mecca for hill walkers, mountaineers, climbers and sightseers who come from far and wide to experience the high jagged tops, steep glacial corries and the exciting airy ridges which provide the finest hill walking, scrambling, winter mountaineering & breathtaking mountain views in the whole of Ireland.

The vast majority of visiting walkers and climbers approach and ascend the magnificent Reeks and Corrán Tuathail via Com Caillí or Coum Cailleach / Hags Glen. But who or what was this now infamous Hag or Cailleach that gave this renowned high mountain valley its name ?

Stretching for over 700 metres and 300m at its widest, and nestled deep in the South Eastern recess of this most dramatic of glens at the lofty elevation of some 330 metres is the wondrous – Loch Caillí – the lake of the Hag. Many have stopped, admired and photographed its rugged wildness and majestic beauty. It is forever dynamic & fluid, always changing. Subtle changes in light and swift rapid shifts in wind and weather.

Not too far from the lakes Eastern shore a tiny wart of a heavily vegetated rocky Island emerges from the inky black depths – Oileán or Crompán na Cailleach, – the Hags knoll or perhaps even wart. This definitely suits the scene! Crompán meaning a “creek” or small parcel or outcrop of land alongside a creek or river and here being a Loch! Crumpaun or Crompaun a term often used to describe a pier or landing spot/place. 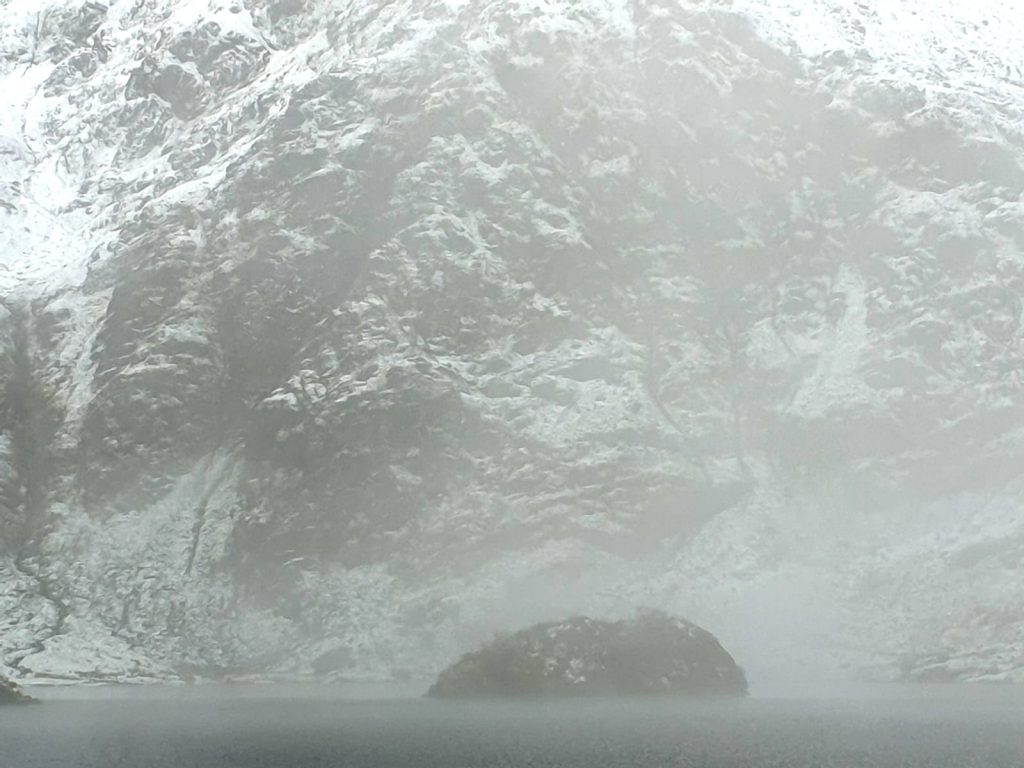 …”There were three Hags living in Kerry. The first hag lived on the Paps of Danú, the second on Mullaghanattin and the third on Corrán Tuathail. They shared a hair comb between them. Sadly the Hag of the Paps died and the two remaining Hags began to fight over the comb. The Hag of Mullaghanattin had an advantage over the Hag of Corrán Tuathail as she was nursing a baby. In order to keep her baby safe she jumped from Corran Tuathail to the top of the Devil’s ladder. She turned towards Eisc Caillí (top of the Ladder?), ran down and couldn’t stop and landed on Carraig na Lathí (rock of the enclosure), causing her footprints to become embedded in the rock. The baby slipped out of her grip and the baby’s footprints were also imprinted on the rock. The four feet of mother and baby can be plainly seen imprinted off the rock on Carraig na Lathí …. The Hag then jumped off the rock, into the lake and was never seen again. To this day the lake is called Loch Callaí … Lake of the Hag”

A tale from the lore of local landowner, historian, archivist and character – Michael Leane of Coolrue

But who was this witch, this Hag, this Cailleach?

The goddess known as Cailleach in Gaelic & Celtic mythology is the embodiment of the Winter deity, Queen of Winter, the divine Hag but also as the harvest goddess. She appears in the late Autumn, as the earth is dying, and is known as a bringer of storms, she controls the weather and winds and she alone determines Winters length and its harshness. She dwells in Ireland, Scotland and the Isle of Man, and many places are referenced or dedicated to her.

She is typically portrayed as a one-eyed old woman with bad teeth and matted hair. She is sometimes portrayed riding on the back of a wolf, bearing a hammer or a wand made of human flesh, and sometimes even wearing human skulls attached to her clothes. 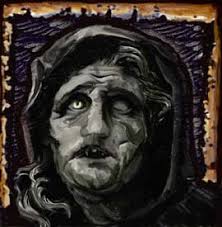 In Scotland, she is known as Cailleach Bheur, while along the Irish coast she appears as Cailleach Beare. The Cailleach rules the dark half of the year, while her young and fresh counterpart, Brighid or Bride, is the queen of the longer summer months highlights the association of the two goddesses. At Samhain, or October 31st, the Celtic year ends and winter begins. In Scotland and the Isle of Man, she transforms into Brigid at Beltane, a fertility festival set to May 1st.

Her name is varied, depending on the county and region in which she appears. According to Dictionary Of Scottish-Gaelic the word cailleach itself means “bedraggled”, dishevelled” or simply an “old woman.” Cailleach>> is a common word in both Irish and Scots Gaelic. It comes from Caillech, meaning “veiled one” in Old Gaelic. These stem from the same base root of all words describing women at various ages, such as Caillin. In some stories, she appears to a hero as a hideous old woman, and when he is kind to her, she turns into a lovely young woman who rewards him for his good deeds. In other stories, she turns into a giant gray boulder at the end of winter, and remains this way until Beltane, when she springs back to life. 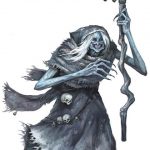 Shee-Eire, a website dedicated to Irish folklore and legend>>, says,

“The Cailleach Beara is ever-renewing and passes through many lifetimes going from old age to youth in a cyclic fashion. She is reputed to have had at least fifty foster children during her ‘lives.’ Her grandchildren and great-grandchildren formed the tribes of Kerry and its surroundings. The Book of Lecan (c.1400 a.d.) claims that the Cailleach Beara was the goddess of the Corcu Duibhne people from the Kerry region. In Scotland the Cailleach Bheur serves a similar purpose as the personification of Winter; she has a blue face, and is born old at Samhain … but grows ever younger over time until she is a beautiful maiden at Bealtaine.” 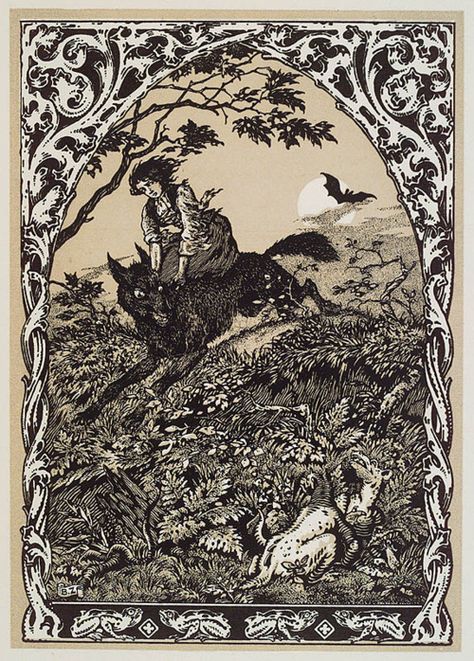 Interestingly, even though Cailleach is typically depicted as a destroyer goddess, especially as a storm-bringer, she is also known for her ability to create new life. She shaped much of the land, whether by accident or on purpose. Her tools of creation and destruction include her hammer, able to control storms and thunder, and in some legends the occasional accidental overflowing well that floods the land.With her magical hammer, she is said to have created our mountain ranges, lakes and ancient high cairns.

She is also known as a protector of wild animals during the dark winter months, the deer and the wolf in particular, but also looks over domestic animals too.The Cailleach is neither good nor evil, often a mixture of both. In Scotland she is a deer herder, while across all three Gaelic-speaking regions she is the patron of wolves, made bold by winter hunger. 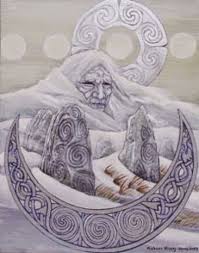 The Cailleach is ageless and immortal, for as winter gives way to spring, she takes a drought of youth that returns her youth. In Ireland she had seven “periods” of youth, thus outliving her many spouses, but is now permanently old.

She is also a goddess of grain>>, Given the importance of this cereal to survival in winter, the last sheath of grain harvested was dedicated to her. During the next planting season, that sheath was then used to begin the next harvest.

Like many goddesses of Ireland she is linked to sovereignty, kingship and rule. As she is a goddess of the land, to rule the land a people must first have her approval.

Perhaps the most remarkable attributes of the Cailleach are her association with places. Across the Gaelic-speaking Celtic world, she is tied to largely inhospitable places, whether on land or sea. Of all Celtic deities, she is perhaps the most geographically-linked.

There are many, including but not limited to: 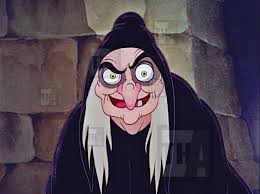 The Cailleach has few explicit familial ties, but the most well-known is the Bodach, a Scottish trickster spirit, with whom she had many children. In an old Irish poem, she was a maiden seven times, allowing her to have many children by many husbands, as well as countless foster-children. By the end of this period, she had outlived them all and was said to be the maternal ancestor of every man and tribe of Ireland. The Cailleach is old enough that many of the myths of her life have faded from memory, but many rituals and traditions still exist, which have inspired poets and writers for centuries. 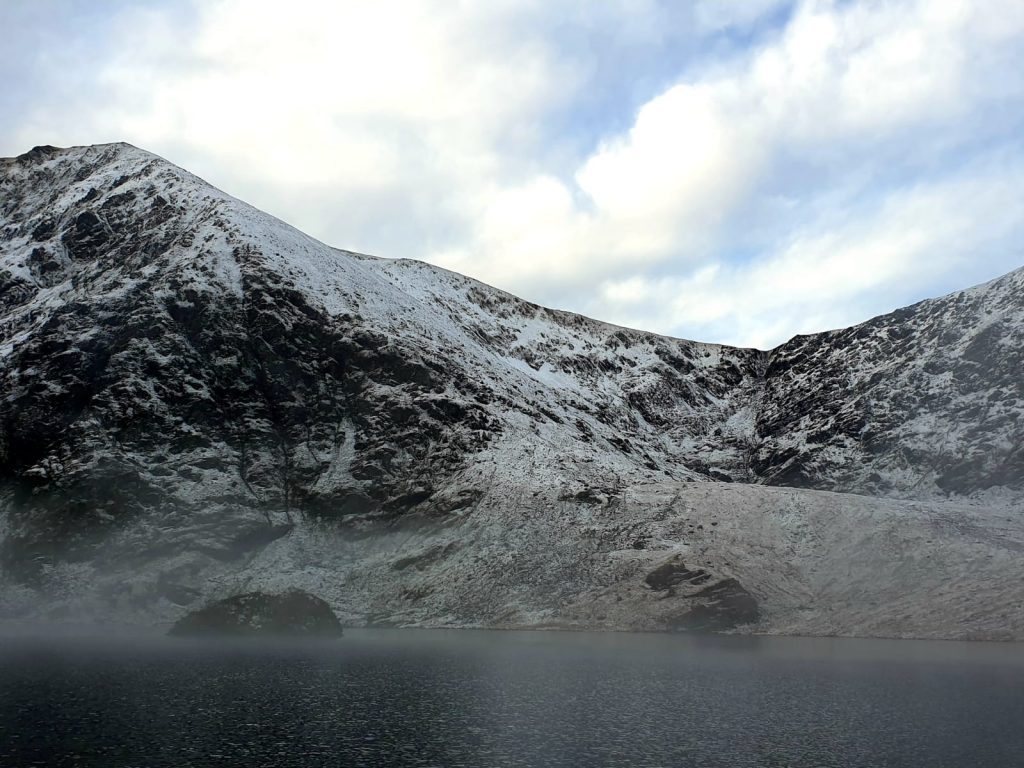