Two weeks ago now my dear mother was taken from us by the big “C”, Cancer. This happened to coincide with me being crazy busy with guiding work and also juggling the indepth preperations for the task of marshaling and safety of the 2012 Helly Hansen Killarney Adventure Race. I suppose being flat-out with work distracted me in alot of ways and helped take my mind off my mothers demise but I feel in other respects that up until now I havn’t really begun to grieve, contemplate and deal with her harrowing end and my own terrible loss.


Well a couple of days after her funeral I headed off – on my own – to the mighty “Reeks” of Kerry to just….escape for a while I suppose….
I really needed to just get away from it all and be where I could take stock…Being in the hills and mountains alone, is at the best of times a deeply satisfying, invigorating and even spiritual experience and a place where no matter what troubles I have I can totally forget about it all – for a couple of hours anyway…But less than a week after my mothers death, getting into the mountains alone now felt as a necessity.I NEEDED to get away for a while… My body,mind and soul NEEDED to get away for a while…

I had one route in mind for such a solo day and the weather wasn’t too bad either so off I headed to climb the mighty Howling Ridge on the North face of Corrán Tuathail…A late start along with a leasurely coffee in Cronin’s tea-room had me at the beginning of the route at the “Heavenly Gates” at around 1o clock. My plan was to climb nice ‘n slow and enjoy every minute and every move but pretty soon I was ” in the groove” so to speak and moving quickly without the usual hinderance of rack and rope. Within twenty minutes I was at the last pitch of the climb and was now on the look out for a strange piece of equipment some mates had told me they had come across while on a recent climb.

The item in question was a heavy duty metal cable,approx 12mm thick slung around a large rock spike. Unusual to say the least for climbers to….
1. Carry and use such a piece of kit on a climb…(climbers use nylon slings for the purpose of protection/anchors, not metal cables)..and…
2. To leave it there instead of removing it afterwards….Obviously never heard of the Leave no trace policy….(or slings!!!!!)… 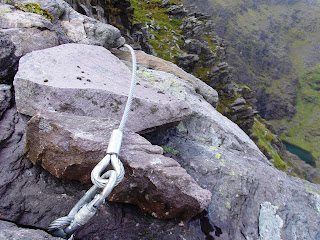 Well pretty soon I found the offending item and after making a few calls to enquire if anyone in the MRT knew anything about it,which they hadn’t, I decided to remove it and packed it into my ruc-sac and went on to complete the climb.


Now of course this isn’t the first piece of gear I have come across  and we all happen upon stuck Cams, Nuts Slings etc left on routes, this happens due to various reasons and of course the Alps are littered with fixed ropes,pitons, pegs etc but I cannot understand why someone would think it necessary to bring and then LEAVE such an unusual piece as an unsightly metal cable on such a route as Howling Ridge…. 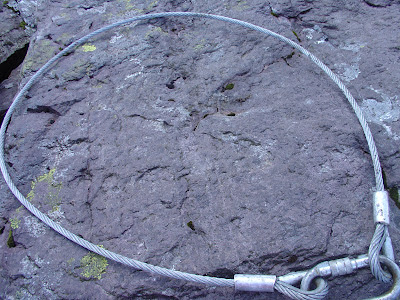 In my opinion this sort of behaviour is  UNACCEPTABLE on this or on ANY  other Irish route for that matter!!!!!

I reached Corrán Tuathail’s cloudy summit 30 minutes after beginning the climb and after a quick bite to eat I began my descent via the Devil’s Ladder.
This was a welcome and much needed day spent in the magnificent wilds of Kerry but now back to the grind and reality again. Now for the job of thorough preperations for the following weeks Killarney Adventure Race….

Well the day began extremely cold with low mists lifting by afternoon to give an absolutely beautiful sunny day.This provided everyone involved with the most stunning views of the amazing Kerry scenery… 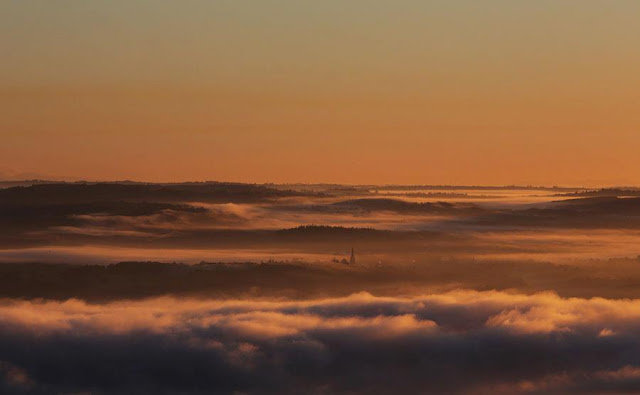 We at KerryClimbing were tasked with providing the first aid response, safety and marshaling of all three mountain run stages of this years Helly Hansen Killarney Adventure Race – Strickeen,Torc and Mangerton and are glad to say we had little or no incidents what-so-ever on .the day… PHEWWWW !!!!!

Well all my weeks of detailed prep and intensive planning paid off and happily the day passed off without a hitch. Really pleased with myself that the massive effort I had put in during hard difficult hard times had reaped its rewards and delighted with the fantastic responsible part all the KerryClimbing marshals had played on the day!!!!

A MASSIVE MASSIVE congratulations to ALL the competitors who took part in this exciting and inspiring event…We are in awe of you all….WELL DONE !!! Also a massive congrats and well done to Ollie and all the Elite crew, to the Civil Defence and Ambulance Volunteers, to ALL the event marshals,sponsors and everybody who played a part in making this years race such a spectacular and safe one…Roll on KAR 2013!!