And the Summer Season ’14 kicks off….

Well the last few weeks have really seen things pick up with lots of enquiries in, bookings taken, courses run, walks guided and lots of fun had and hence it’s taken me so long to get around to updating the Blog…

We had a manic busy Easter weekend of absolutely gorgeous weather which helped make all our guided ascents so much more enjoyable and memorable. 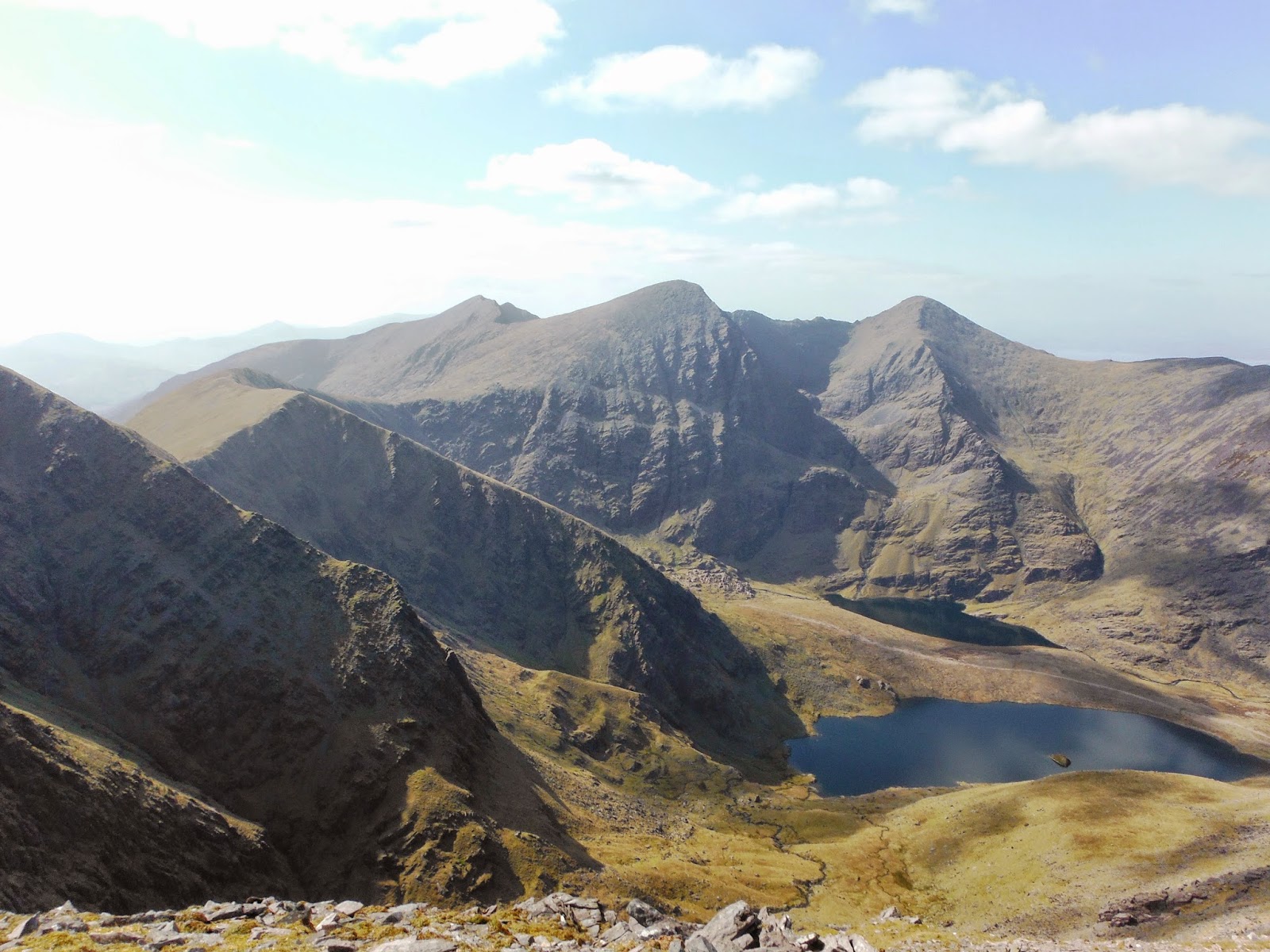 Here’s a few of the super highlights of the last few weeks. 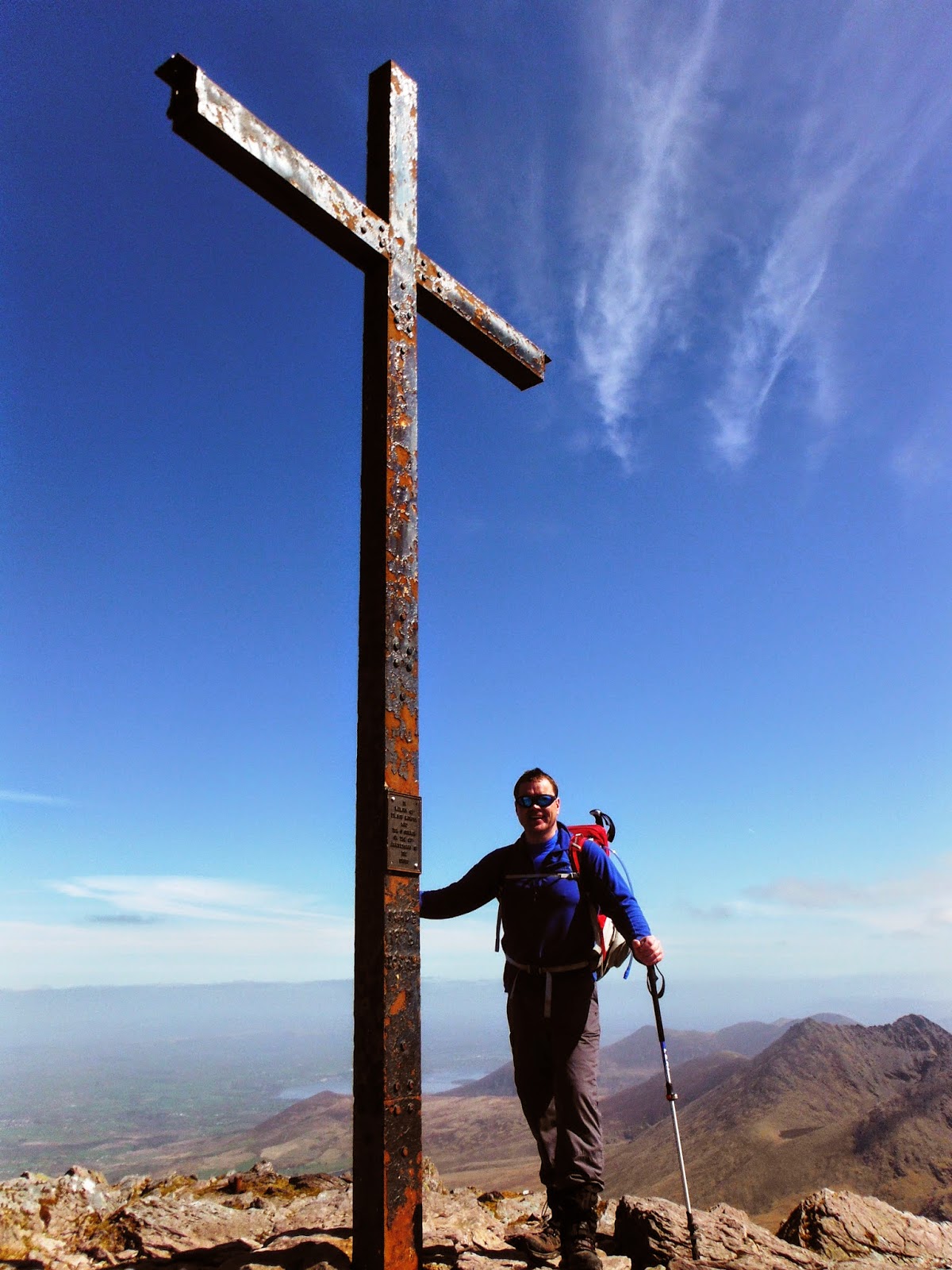 What a phenomenal sunny day Barry got on the 14th of April for his guided full traverse of the Reeks…Absolutely roasting and my big red head shining like a traffic light at the end of the day told it all. Barry from County Antrim really couldn’t have got it any better and we enjoyed a truly spectacular long day high amongst the mighty Reeks.

Cloudy enough as we began the day from the Hyro road car park where Catherine had dropped us at 7:15am and had made excellent time to reach our first summit of the day – Caher West (975mtrs) at 9:20am.
From here it was onto Caher main top 1001mtrs, Corrán Tuathail 1039mtrs,detour across the Binn Chaorach ridge to tick off Binn Chaorach 1010mtrs, cloud beginning now to break and sunshine has us loosing layers and donning our shades. Heating up now as we scramble back again across the ridge to Corrán. Quick break and descend to the top of the Ladder and up again to Cnoc an Toinne 850mtrs. After another descent a hellish slog to the summit of Cnoc an Chuillin where we got out the jet-boil and enjoyed a well earned lunch of pot noodles followed by gravy thick Hot-chocolate. Soaked in the hot sun rays for a while before off again to Maolán Buí (973mtrs) and then the impressive Cnoc na Péiste 988mtrs. 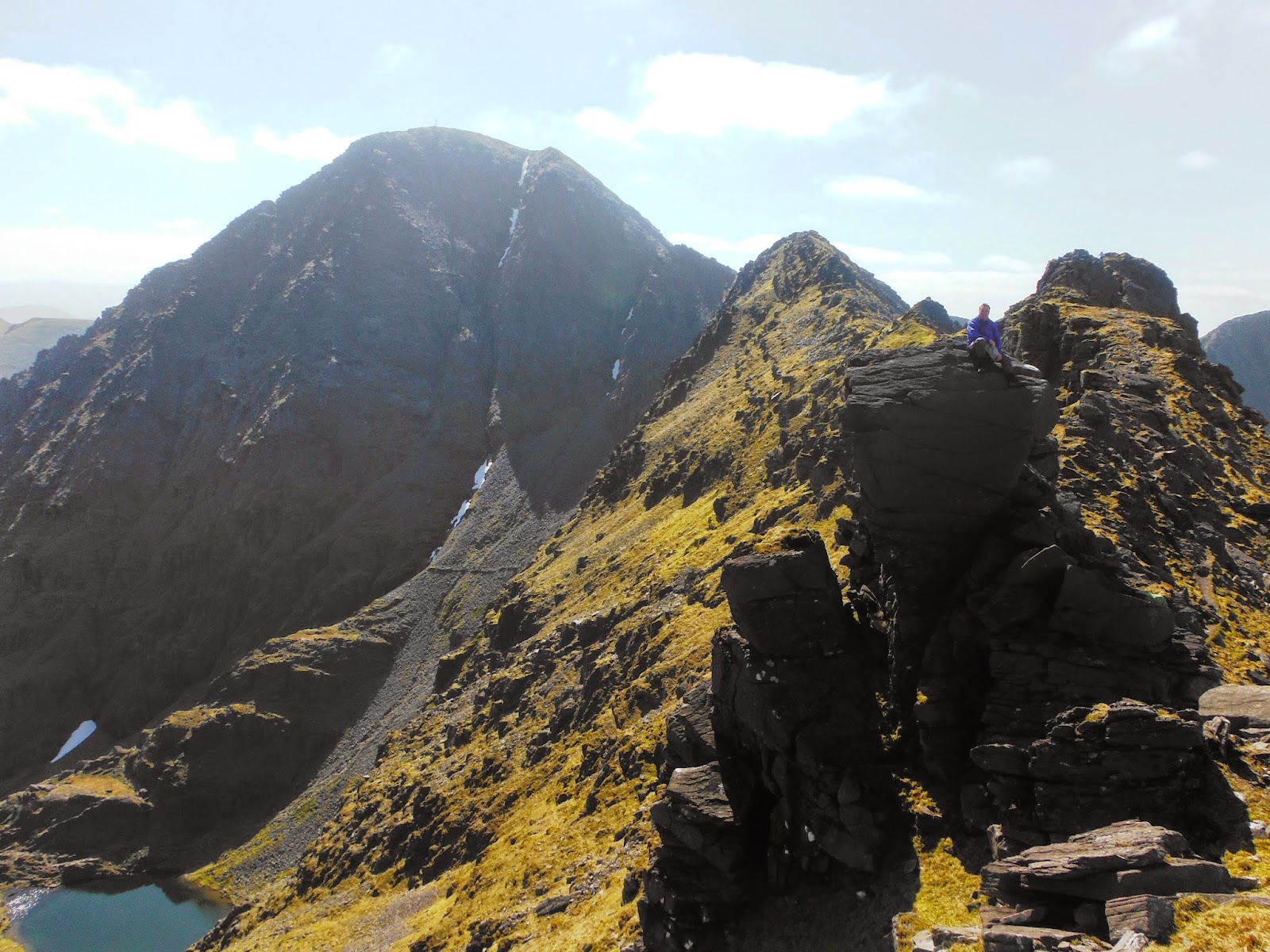 Now for the grand finale and the sensational scramble along the twisting knife edge ridge taking in the superb Big Gun 939mtrs and finally the last rocky climb to the summit of Cruach Mhór -932mtrs arriving to our final top at approx. 5:30pm.
A slow and careful descent from here to finish in Cronin’s Yard at 7 O’ clock at the car I’d dropped here on the evening before…

12 hours of sheer bliss spent walking and climbing amongst mighty mountains with the most awe-inspiring views. By god we’ve a magnificent country….and when the sun shines sure there’s no where nicer.

18th of April and a Scorchio day of Kerry Climbing…

A busy day of Kerry Climbing with an Intro Climbing course for 4 Italians and 1 Kerryman in the wonderful Gap of Dunloe and Mike away in the Reeks guiding 2 Ladies up Corrán Tuathail. 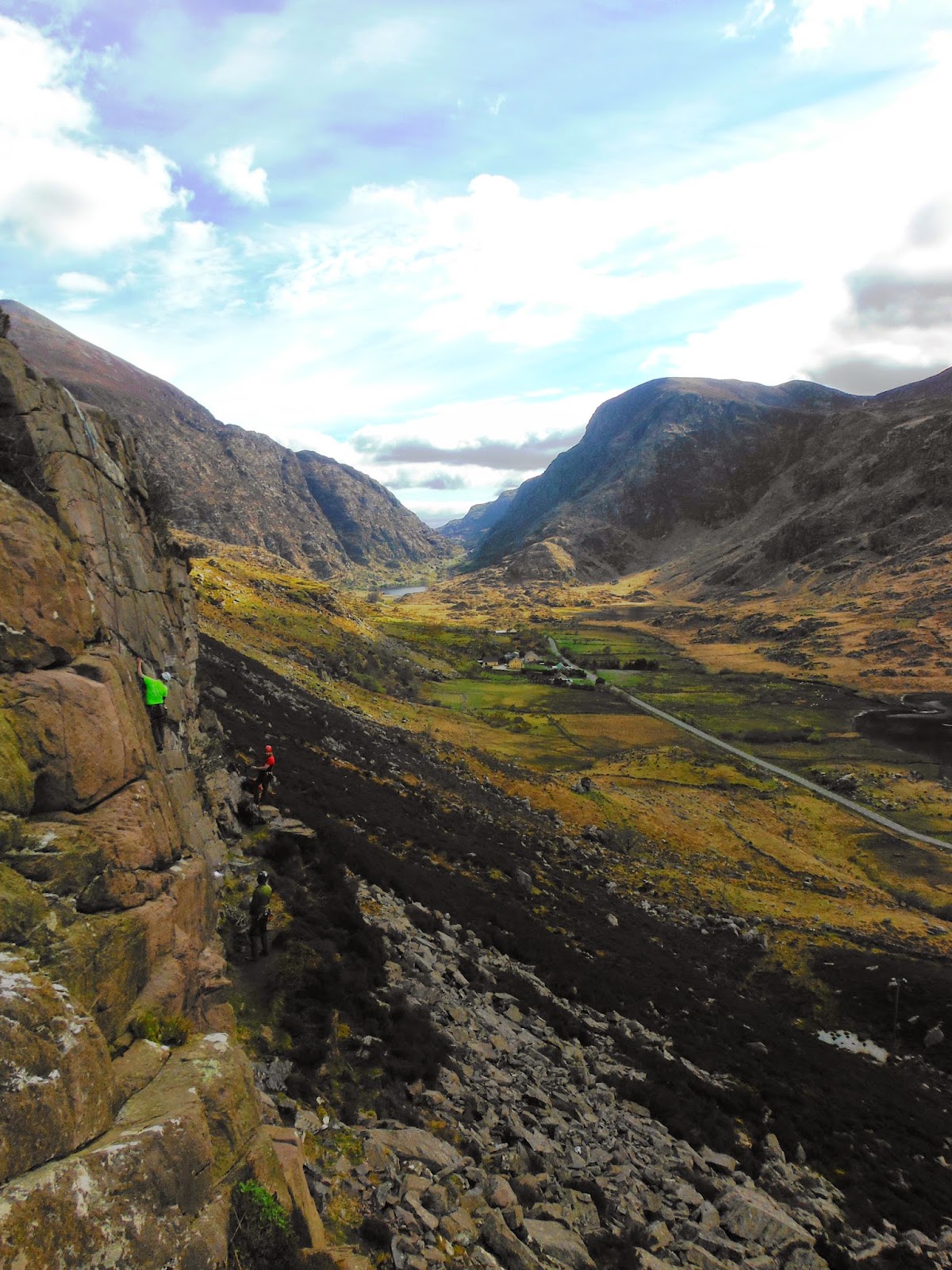 A superb sunny day spent showing the ropes high up on the wonderful airy crag …of Bothán and a fantastico fun and hugely informative day climbing such super lines as – Raven, Agent Orange, Ljublijana, Spider and Private Investigations.

Mikes crew had a spectacular day climbing Irelands highest via the Devil’s Ladder with reports of people ascending from all directions!!!

Another busy day of it the day after with Mike back guiding more up Corrán and me back Rocking the Gap with another Intro course…and more sun even!!!

Easter Monday myself and Richard were guiding 4 to the summit of Ireland’s highest by the hugely exhilarating and always memorable classic – Howling Ridge. 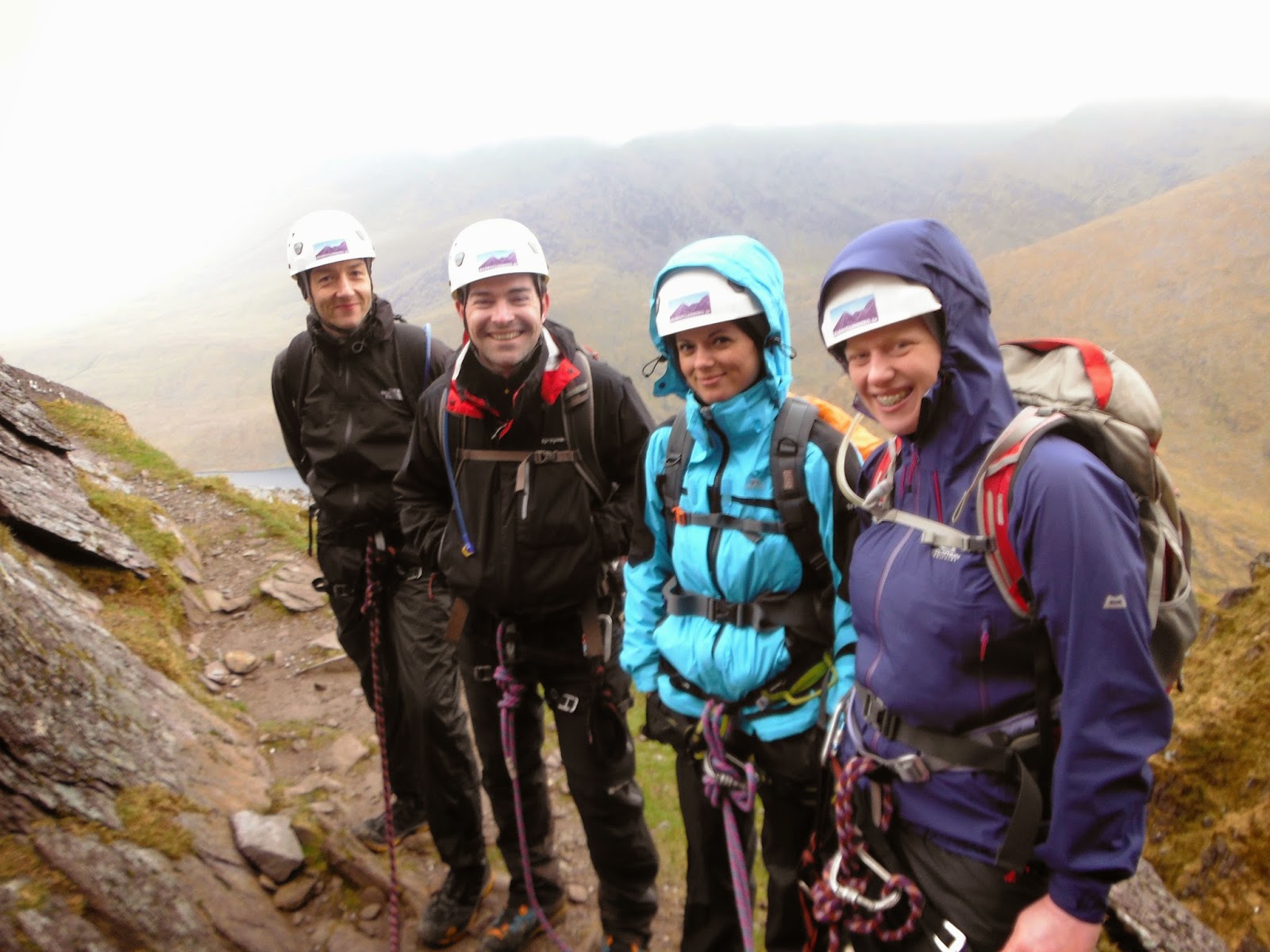 Liam, Dorina, John and Noreen were ascending as part of a two day course where they had spent the previous day in the beautiful Gap of Dunloe, learning the ropes so to speak and all the other skills needed to prepare them for the following days spectacular Adventure!!!
Early morning rain and low cloud soon cleared and lifted hence providing us with the awe-inspiring views and a marvelous fulfilling day was spent climbing to the summit of Corrán Tuathail by this most mind-blowing of routes. 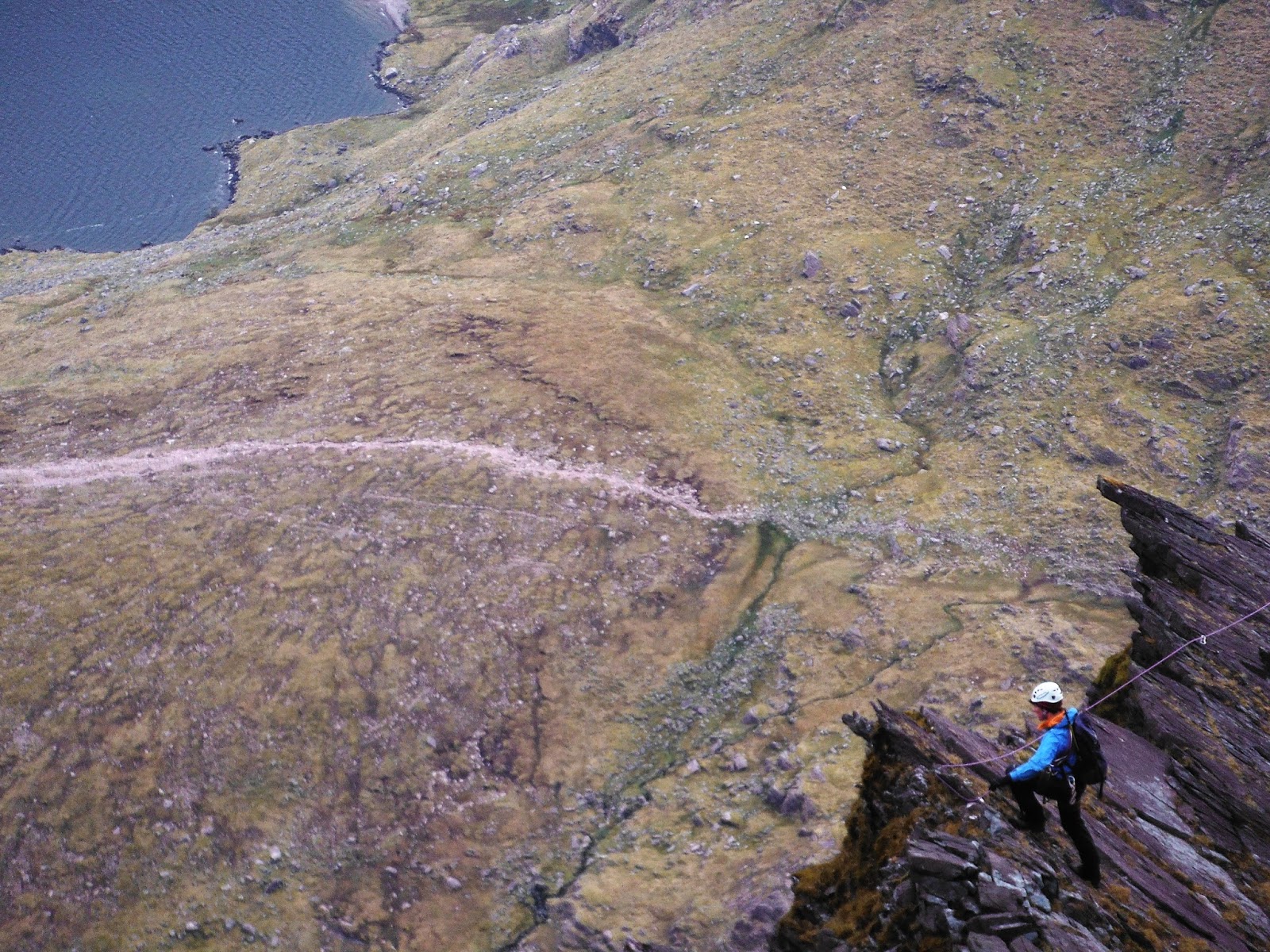 Descended via the Heavenly Gates and finished the day with delicious soup, scones and coffee in Cronin’s yard!!! 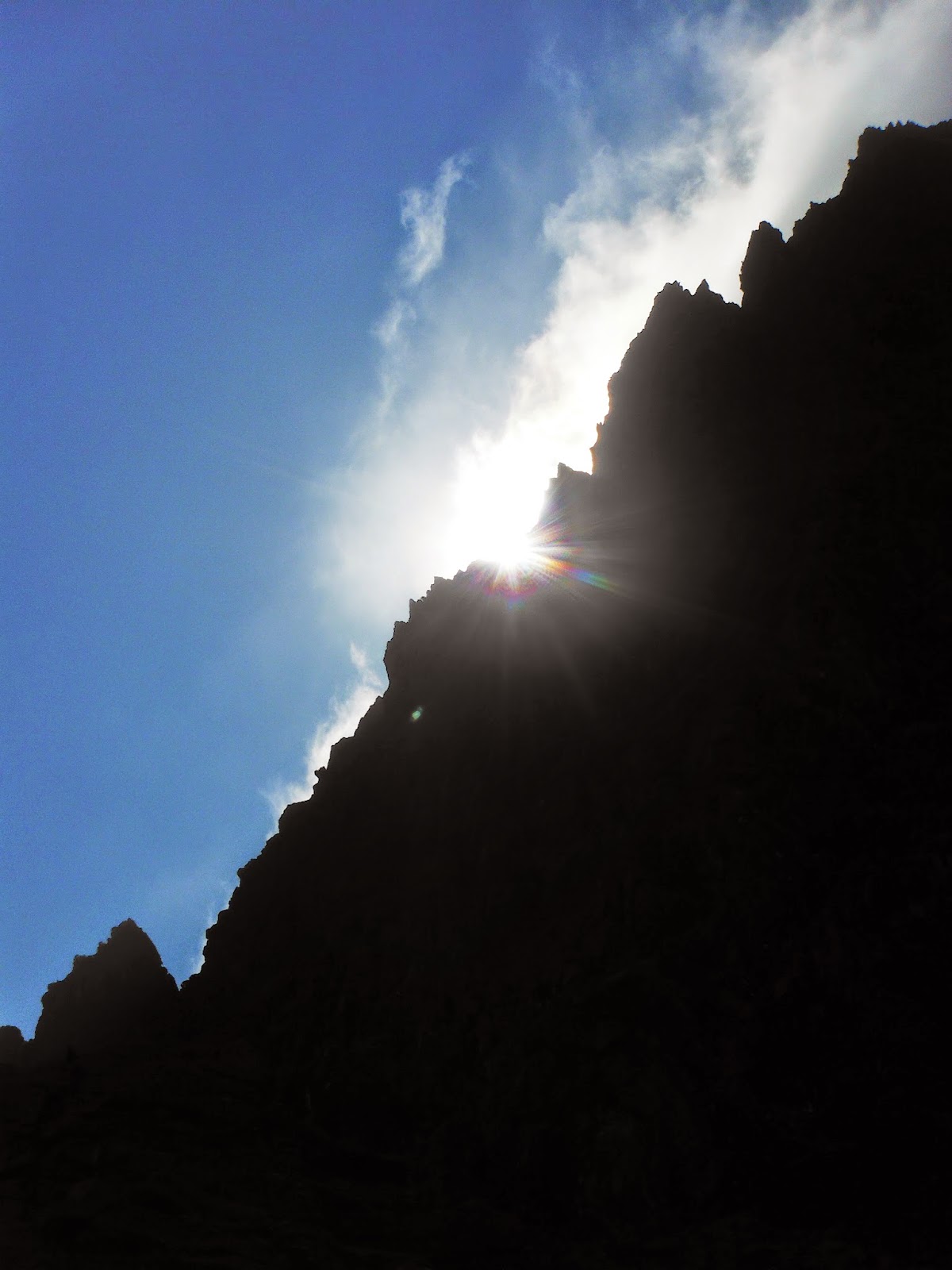 Took a few welcome days off with the family to celebrate my BIG 4 – O and lazed around doing absolutely nothing…
Well apart from a bit of cycling, Kayaking and climbing but relaxed and took it nice’n’easy later in the week on a short break to Adare in County Limerick… 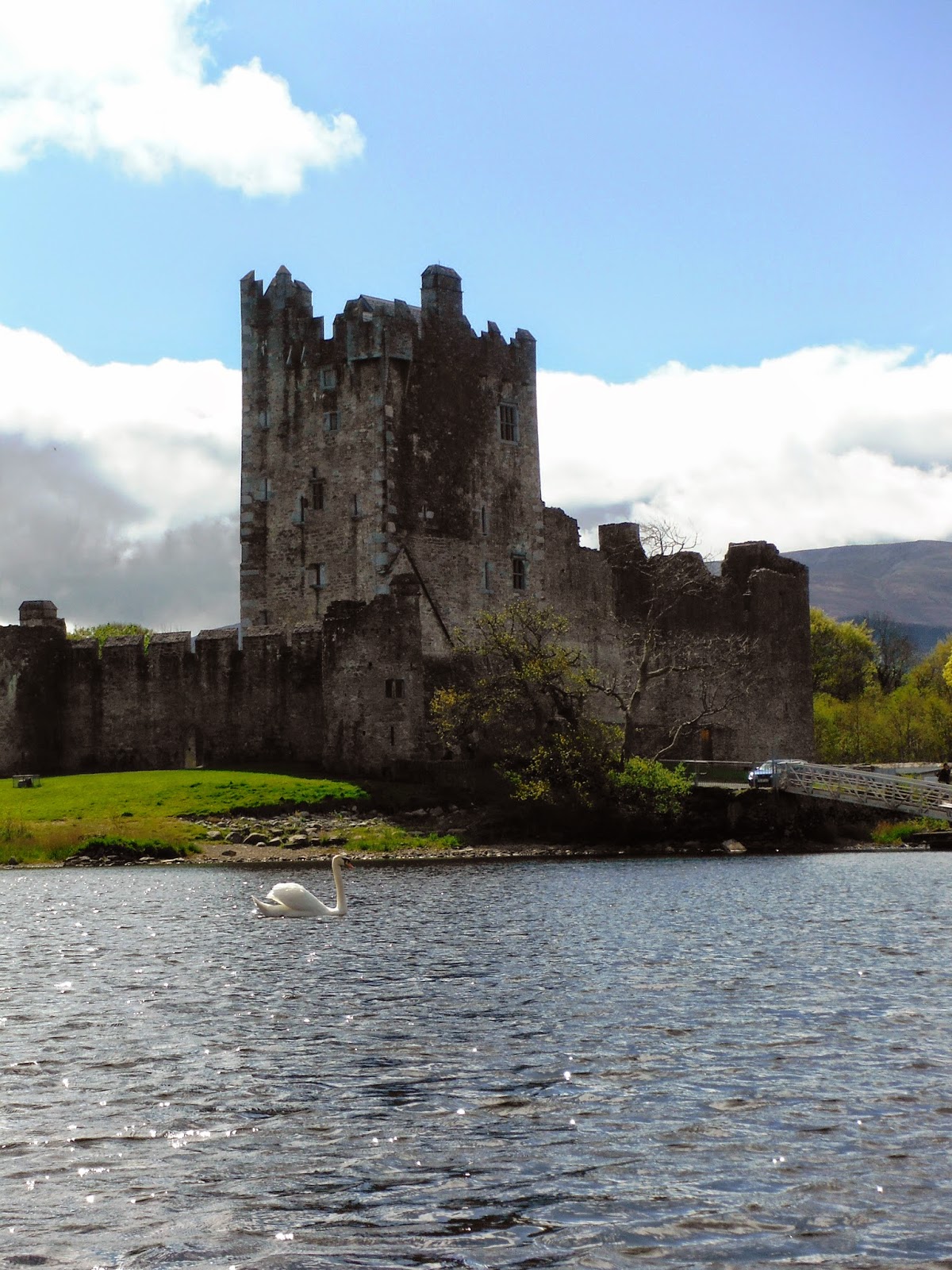 May 1st and we kicked off our first day of summer back on Corrán Tuathail…
Summer officially begun with sunshine, showers, cloud and mist…typical Irish summer stuff really. Guided 3 ladies to the dense grey summit via O’ Sheas gully and descended back again to the sunny Hags Glen by Bóthar na Gíge… 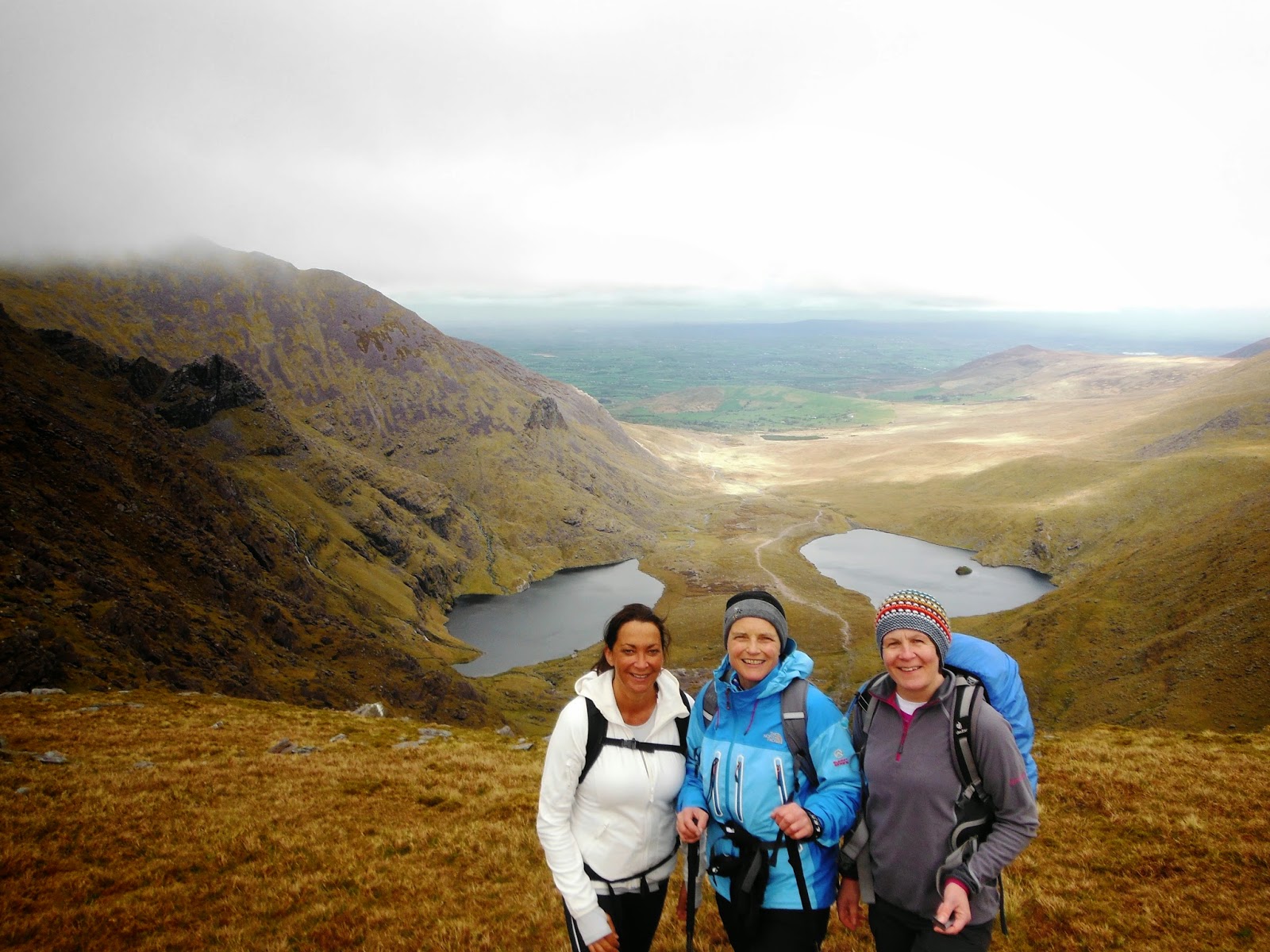 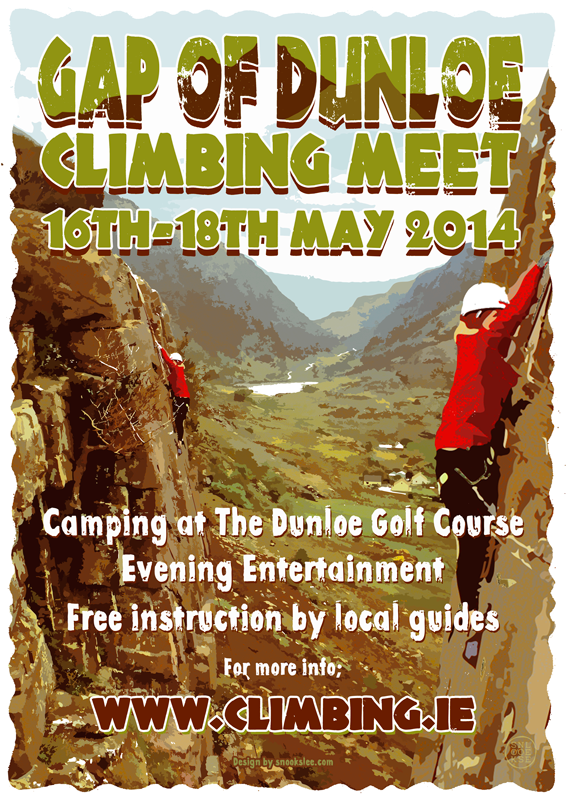