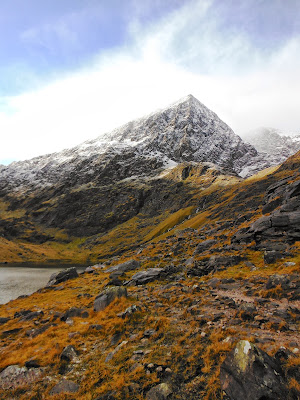 First post of the New Year and we would like to wish  all a very Happy and Adrenaline filled New Year.

We send a huge message of thanks and appreciation to everyone who has walked & climbed with us, helped and supported us, to all our friends and to all who have taken an interest & followed our page and exploits during 2013.

Yet another storm is raging outside as has been the weather pattern of the last two weeks, but it hasn’t been ALL bad. 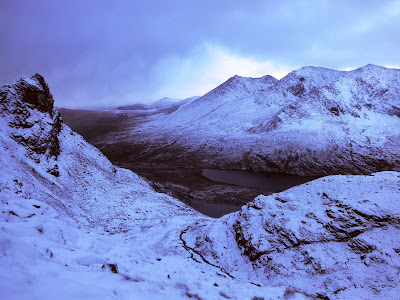 With childminder sorted I departed from home at the foot of the snow covered Reeks at around 2pm with only one route in mind – the grade I/II Curve Gully on Corrán Tuathail.
A decent dumping of snow last night had made the mountains look VERY impressive indeed and it had been a while since I’d climbed this superb route to the top, so with axe, crampons and nice flask of hot juice all packed I drove the short distance to Lisleibane with Lily, our SARDA mountain Rescue dog and struck off into the Glen wired up with my MP3.
A truly spectacular few hours spent in the most stunning of scenery. Quite decent conditions in the gully itself with good firm turf, knee deep snow and surprising amounts of ice formed!!!
Topped out at 5pm and due to the reflection from the snow it was still bright enough to take a summit pic.
Descended via the Devils Ladder by headtorch and home by 7 nicely satisfied!!!! 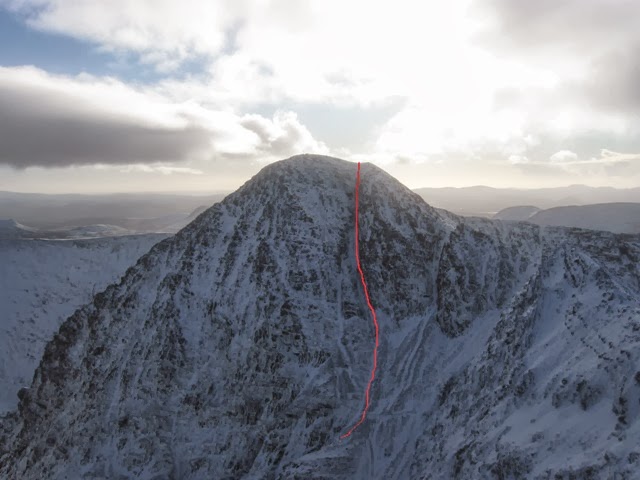 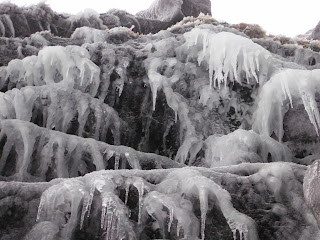 Well by the time I returned to Cronin’s Yard in the late afternoon it was absolutely blowing a gale and lashing down which made this days double ascent of Curved Gully on Corrán Tuathail taste all the sweeter.
Headed into a magnificent Wintery Hags Glen this morning with the hope of burning off some of the Christmas day indulgences and also in the hope of grabbing the last of some Wintery climbing before it all disappeared in the forecasted deluge.
Great to see lots and lots of people out and about with many heading up the usual suspects such as O’Sheas and of course the “Ladder”.
I headed for the line less travelled, the Classic “Curve Gully” and had superb sport on my own – kicking and whacking up quite decent ice and snow to the summit of Ireland’s highest. Met a friend at the top and as he too was keen for a bit of sport we carefully descended the snow filled “Central Gully” and after traversing across to the start of “Curved” I enjoyed its icy delights once again as we blissfully climbed this gem and topped out with beaming smiles.
Descended this time via the Ladder and arrived back to Cronin’s as the forecasted storm arrived.
I was contacted the following day by a local newspaper – The Kerryman who saw some pics of this ascent on Facebook and interviewed me and printed a small piece regarding this ascent.. 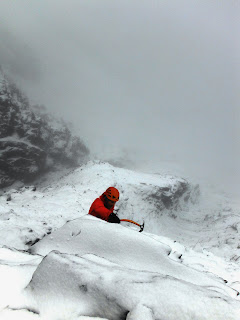 Dec 28th:
Managed to grab yet another superb day climbing my flavour of the week – “Curve Gully” on Corrán Tuathail.
Had fantastic day climbing this icy snow filled gem with a mate who’d driven down this morn from Dublin and my best mate Mick from Cork who was home for Christmas visiting from London.
Plenty of good ice and great snow made it a hugely enjoyable day with great company…Had so much fun that again we descended a snow filled “Central Gully” and re-climbed “Curved” a second time!!! 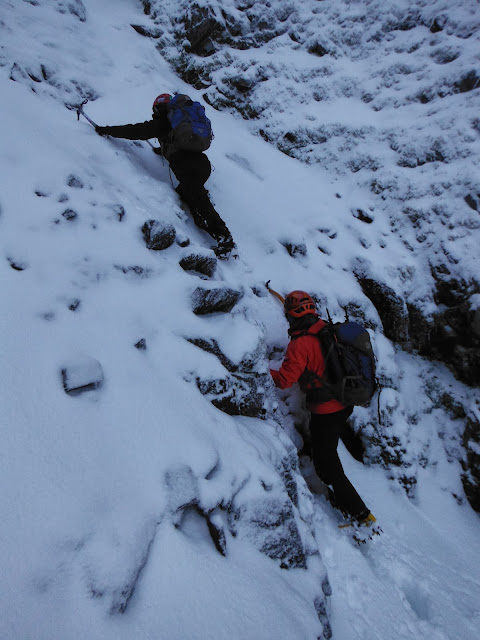