We finally kicked off our much awaited 3rd Winter Lecture Series on Wednesday night with an impressive crowd attending the Boole Theatre in Cork to hear the renowned Mountaineer, Author and Broadcaster Stephen Venables. A hugely inspiring and impressive talk by Stephen titled “Mountains of the Seven Continents” – A lifetime of climbing adventures and first ascents.
When Stephen led a sailing-climbing expedition to the Antarctic Peninsula this year he finally achieved his dream of climbing on all seven continents. In this talk he included highlights from over forty years climbing around the world, from the Eiger to Everest, Tierra del Fuego to Uganda, the Hindu Kush to the Southern Alps, Namibia to the Rockies. Stunning photos and riveting tales of a lifetime of amazing climbing Adventures. 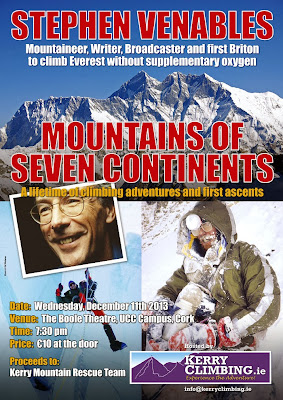 As is now the norm at our lectures, we finished with our traditional raffle with some fantastic prizes helping raise even more funds for this years beneficiary – Kerry Mountain Rescue Team.
I wish to extend a massive, warm and heartfelt thanks to all of those who donated brilliant prizes and of course to everyone who came along on the night and helped to make it such a huge success.
(Click on the links below each logo to view more info.)
﻿﻿﻿﻿﻿
﻿﻿﻿﻿﻿
﻿
﻿
﻿ 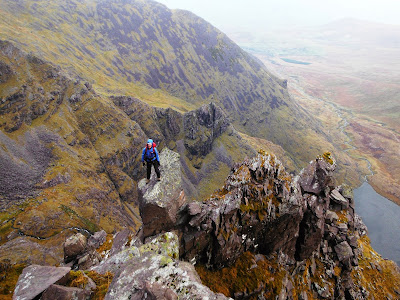 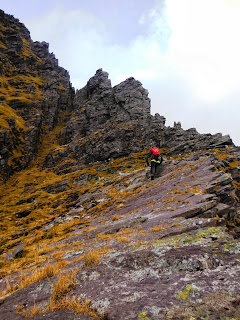 I was luv’n it!!! Stephen had long been an idol of mine ever since I’d read his book – “A Slender Thread” many years ago. It tells the epic tale of his first ascent and subsequent near death fall, plummeting  300 feet after an abseil point failed on descent after doing the first ascent of a Himalayan giant called “Panch Chuili V”. As we stopped to relax and take in our surroundings I noticed Stephen massaging his knee a little and when I probed if it was troubling him he reminded me of that epic tale by simply referring to a condition he suffered nowadays called “Panch Chuili knee”!!! I was not only in the presence of a true mountaineering great but also having the pleasure of spending a day climbing in the mountains with him and showing him some of the wonderful delights of the MacGillycuddy’s Reeks of the Kingdom of Kerry 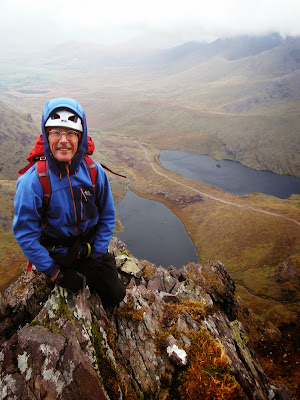 We descended back down again to the Hags Glen via the long “Stumpa an tSaimh” (Hags Tooth ridge) and rested awhile underneath the mighty rock tower known as “The Tooth” (An Stumpa). While relaxing and chatting here I pointed out Joss Lynams 1953 rock route on this impressive pinnacle called the “Wedding March”.

As-well as our Winter Lecture in Cork, the following evening Stephen would also be the guest speaker in Dublin for Mountaineering Ireland at their annual lecture in memory of Joss Lynam, whose contribution to Irish climbing and walking spanned 60 years until his death in 2011. Stephen would be the 3rd recipient of the “Lynam Medal”, an award set up in Joss’s honour in recognition of ones contribution to climbing and notable Mountaineering achievements.


We leisurely made our way back out the lovely Hags Glen and after driving the short spin back to the house we grabbed a quick bite to eat before we then headed to Cork for the evening talk. Legs and bodies felt weary and tired but the one and a half hour drive gave us a nice chance to relax a little before the busy evening of meeting and greeting at the evening lecture in UCC. A highly entertaining evening and a hugely inspiring and entertaining talk by a really fantastic speaker and true gentleman Mr Stephen Venables. 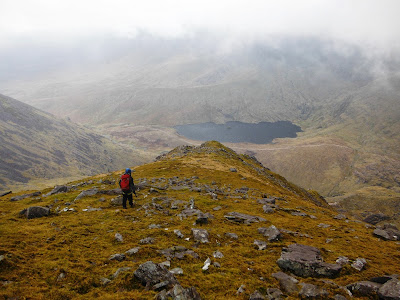 ___________________________
Next up in our series is Irish Adventurer Mike O Shea who will be telling tales of his amazing recent expeditions. Facing temperatures as low as minus fifty degrees centigrade and howling gales that confined him to his tent for days on end, Mikes personal crusade to cross all of the major icecaps of the world is certainly extreme. His talk will cover his travels to the worlds largest lake , frozen Lake Baikal in Northern Russia , the rarely attempted North Patagonian Icecap and his almost fatal attempt on the North Pole. 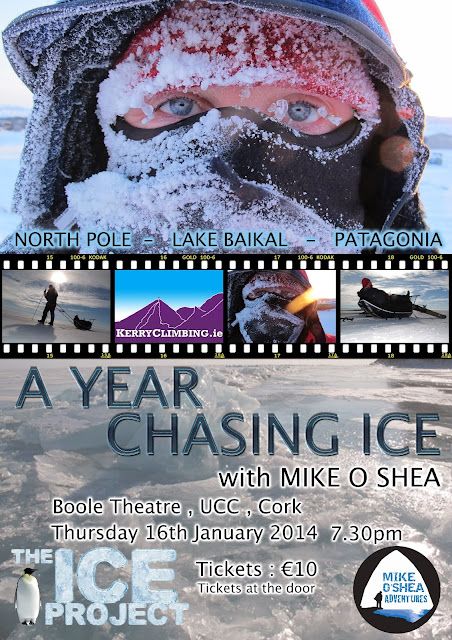