Coum Gabthartha is better known as Crotty’s Coum. William Crotty was a famous Waterford highwayman who was hung, drawn and quartered in the city in 1742.
His life as a highway robber was not a solitary one. He was married and was the leader of a gang of highwaymen who operated in the Co.Waterford area and whose exploits took him into the heart of Waterford City (20 miles away). His “hideout” was said to be near the foot of the cliff overlooking the lake. Access to the “hideout” was gained only by a rope which was thrown over the cliff face.
He also, as the tale goes, frequented a local tavern at Dá Rue’s Cross now owned by the Hehir family and descended from his mountain home only to steal from the passers by (always rich) and gave the money to the impoverished people of the area.
Indeed the legend runs that Crotty hid his loot under a rock on the mountain with a special mark but was unable to collect because of his capture. The actual destiny of this bounty is still a mystery.
Crotty’s demise is a famous one. After evading capture for many years with a sizeable bounty on his head, through shoeing his horse backwards and throwing the Redcoats off his routes he was betrayed by one of his friends, in fact his closest assistant. His home, a cave in the cliff above the lake, was hidden away from the view of the soldiers which searched for him.
So frustrated were the patrols charged with his capture that they gave up chasing him and employed the services of Crotty’s long time companion, a man by the name of David Norris. After having a meeting with Crotty at the cave, he waited till Crotty was asleep and after wetting the highway man’s gunpowder betrayed Crotty to the Army who made their arrest on February 16th, 1742. When the Waterford Assizes opened on the 17th of March the most important case before them was that of William Crotty. The sentence of Crotty swiftly followed and his execution and subsequent exhibition (Crotty was hanged, and quartered, his head cut off and fixed to the County Goal as a warning to similar malefactors) in Waterford city is detailed below. 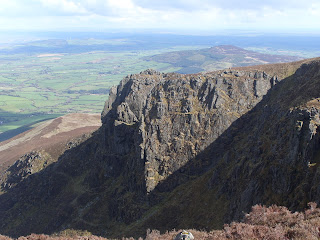 After Crotty’s death the authorities hunted his wife and she is reputed to have thrown herself and her child off the top of the cliff bearing his name, to her death.

The following appeared in a book “Ireland Sixty Years Ago,” published in 1849.

“After Crotty was decapitated pursuant to his sentence, and his head was placed on a spike over the gate of the county gaol, which was at a great thoroughfare, and often a resting place for those who brought milk to the markets. In a few days, the head became in a state of putrid solution, and began to distil drips of gore into the milk cans, for some time before it was discovered, to the inexpressible horror of all those who had been drinking the milk. The hair did not decay with the flesh and grew on the bony cranium; and there for a long time the ghastly skull of this miscreant excited as much horror after his death as his cruel actions during his life.
When a criminal was executed for an offence for which his body is not liable to be given to the surgeons for dissection, his friends were allowed to take it. It was washed and then laid on a truss of straw in a public street, with or without a head, and a plate was laid on the breast, with a halfpenny on it, as an invitation to passengers to contribute to the funeral. It formed sometimes a solemn spectacle, with the felon’s widow at the head, wailing, with dishevelled hair and singing, in a low dismal chant, her lament: his children ranged at the feet. But the utter indecency with which the executions were then accompanied, sometimes occasioned the most revolting and horrible scenes.
About the same time at which the abominable occurrence above mentioned of Crotty’s head took place, three highwaymen, Stackpole, Cashman and Heirly, were hanged in Waterford. Their bodies were given to friends and were brought to the fish-house, to be washed. While in the act of being washed, the bell rung to intimate a fresh arrival of fish; their bodies were hastily removed from the boards which they occupied, and the fish were thrown down in their place, swimming in the loathsome washings and the blood of the corpses. They were then exposed on the straw in the street and an elderly gentleman, who communicated the circumstances to us, was brought by his nurse to see them, as a sight worthy of contemplation.”