Well after the initial disappointment of cancellations and rescheduling due to the atrocious stormy weather over the festive break, it at last settled down enough for us to finally get out for plenty of work and play!!!
We were blessed to have two chilly but extremely beautiful days for Intro Rock-Climbing courses in the wonderful Gap of Dunloe. 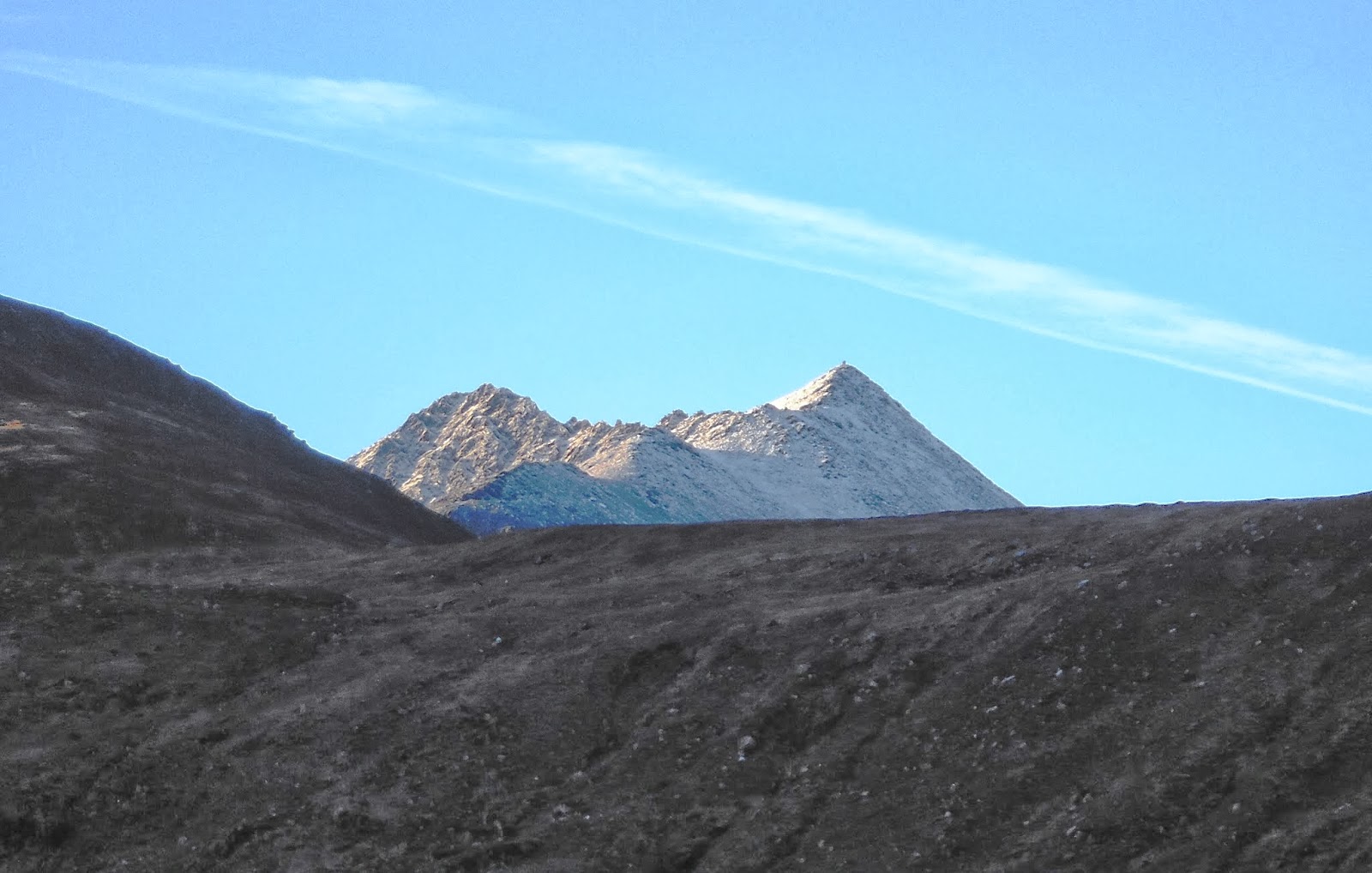 The first of these was for a group of three – Brendan and Bart from East Cork and Karl from Kilkenny, and the second was for two first time visitors to Ireland, Tim from South Africa and Meghan from Florida. Both were truly stunning & calm days with a lovely dusting of white visible on Cruách Mhór and the Reeks which peeked over the Western side of the valley across from us.
Lots of subjects covered on both days, from Anchors to Belaying to Knots, Abseiling, Technique and lots more besides.
_____________________________________________________
Then we had a  fantastic turnout in UCC for Part 2 in our Winter Lecture Series.
A fascinating talk titled – “A Year Chasing Ice” by Irish Adventurer and Climber Mike O’Shea who told us all about The Ice Project. 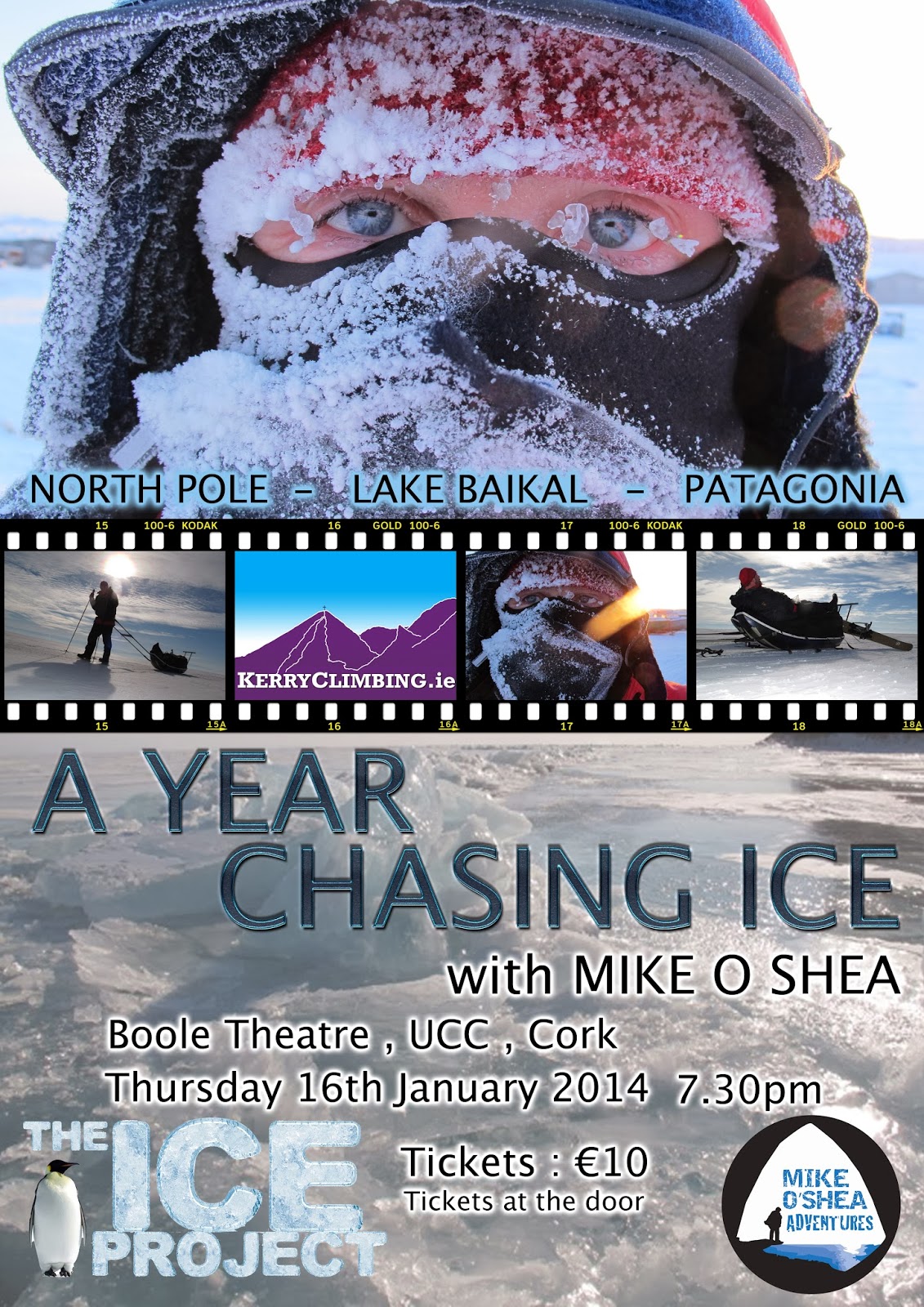 We heard exciting and riveting tales of his amazing recent expeditions with other Irish Adventurer – Dr Clare O’Leary. Facing temperatures as low as minus fifty degrees centigrade and howling gales that confined him to his tent for days on end, Mikes personal crusade to cross all of the major icecaps of the world is certainly extreme. His talk covered their travels to the worlds largest lake – frozen Lake Baikal in Northern Russia , the rarely attempted North Patagonian Icecap and his almost fatal attempt on the North Pole as well as their upcoming re-attempt where he hopes of being the first Irish team to reach the pole by foot!!!
A highly enjoyable evening and hugely successful fundraiser for this ambitious project.

Day 1 was a gorgeous day spent assisting on an assessment on the wonderful hills overlooking Glenbeigh and Lough Caragh.
Spent the first half of the day putting the gang through their paces while ticking off the summits, cols and saddles around Seefin Mtn and then the latter part of the day into sundown and night Nav on the hills located on the Southern side of the “Windy Gap”, namely “Coolroe”.
Absolutely spectacular views all around and especially of the snow topped Reeks beyond to the East and l was really looking forward to heading over that way for day 2. 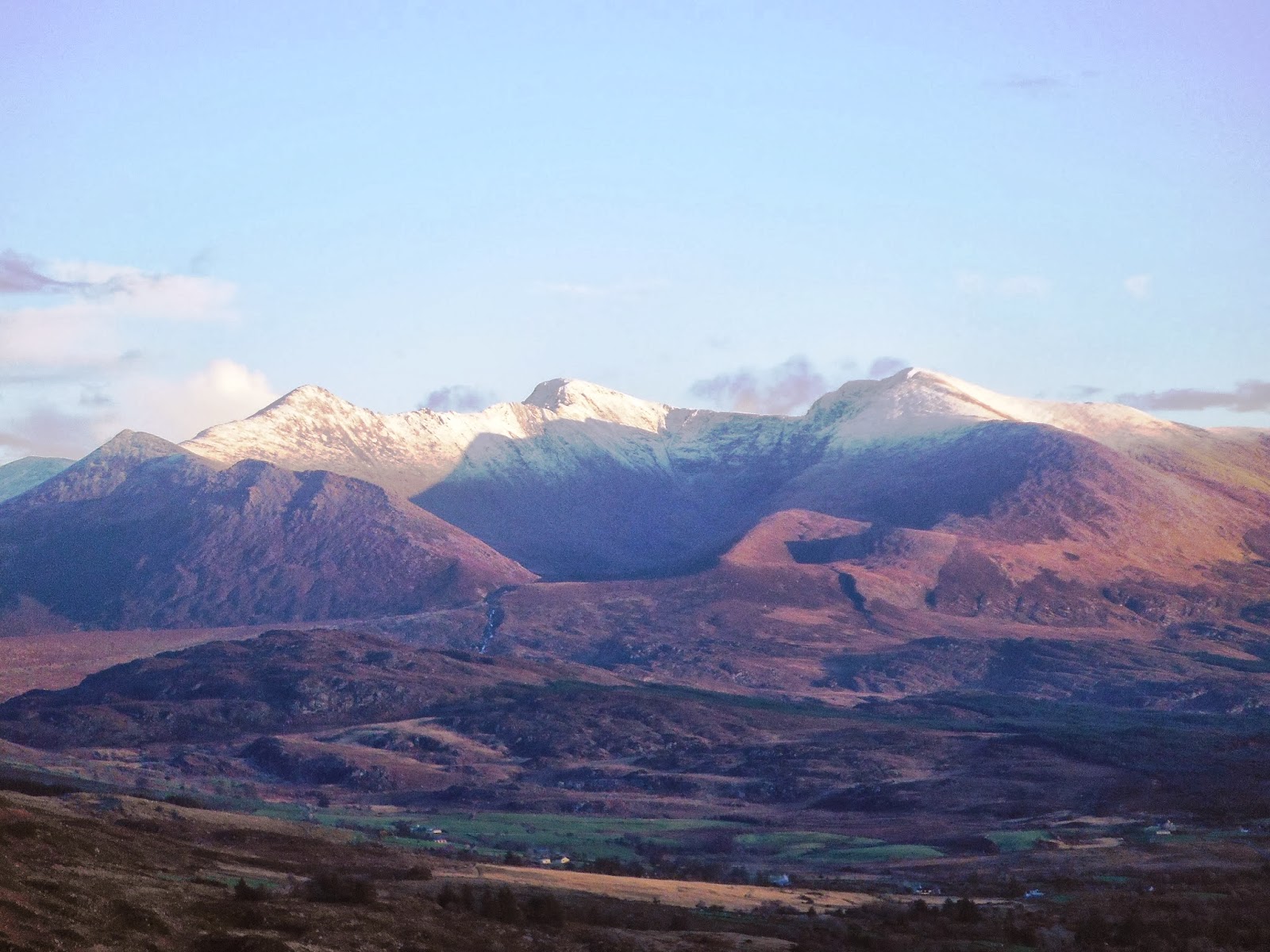 Day 2 in comparison turned out to be an extremely cold, wet and downright miserable day, spent on Corrán Tuathail.
Stayed low-ish enough, only climbing as far as the “Eagles Nest” an elevation of approx. 500mtrs just above the snowline. Testing conditions and a good tough day to be covering Nav and movement on steep ground.
Had a quick lunch in the welcome shelter of the Emergency Hut while covering grid references etc before again braving it.
Plenty of snow falling as we descended from here via the Balcony and arrived back to Cronin’s well and truly sodden!!!
Spent the evening frantically drying all the gear by the fire as the plan was to head up again solo in the morning for a bit of axe action before the warmer wet front swept through in the evening and stripped it all once again. 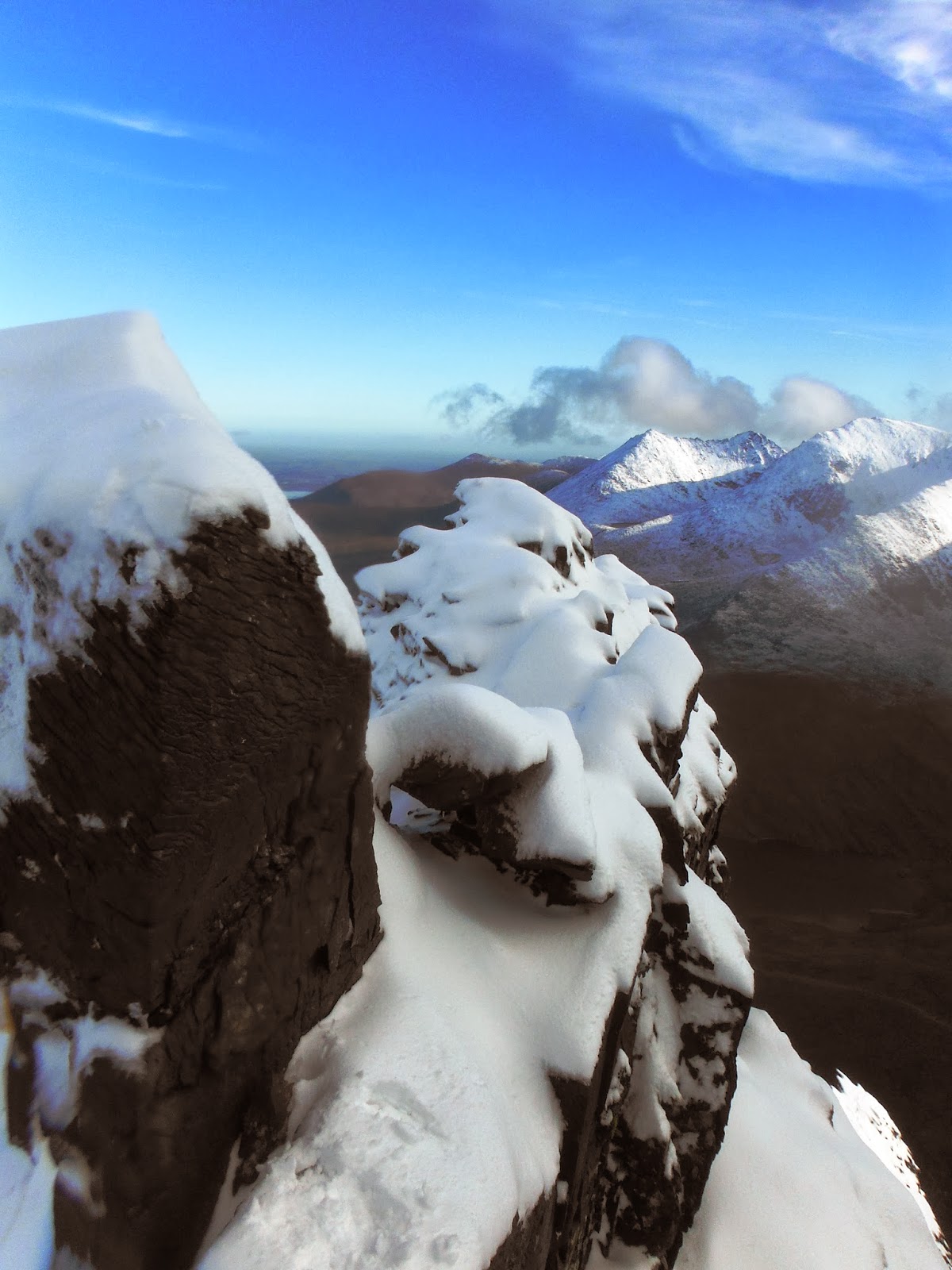 Howl of a time alone on a Wintery Howling Ridge…

Well the forecast was for a warmer wet front to sweep through the Reeks in the evening and so with gear dried I headed off to Corrán Tuathail to grab some last bit of axe action before all the snow was gone.

With my MP3 to keep me company I made good time to the first level meeting and stopping for a chat with some past clients on my way in the Glen. As I was yet undecided which route to go for I made a last minute decision to strike for the Heavenly Gates and climb the magnificent Howling Ridge high up on the North face!!! 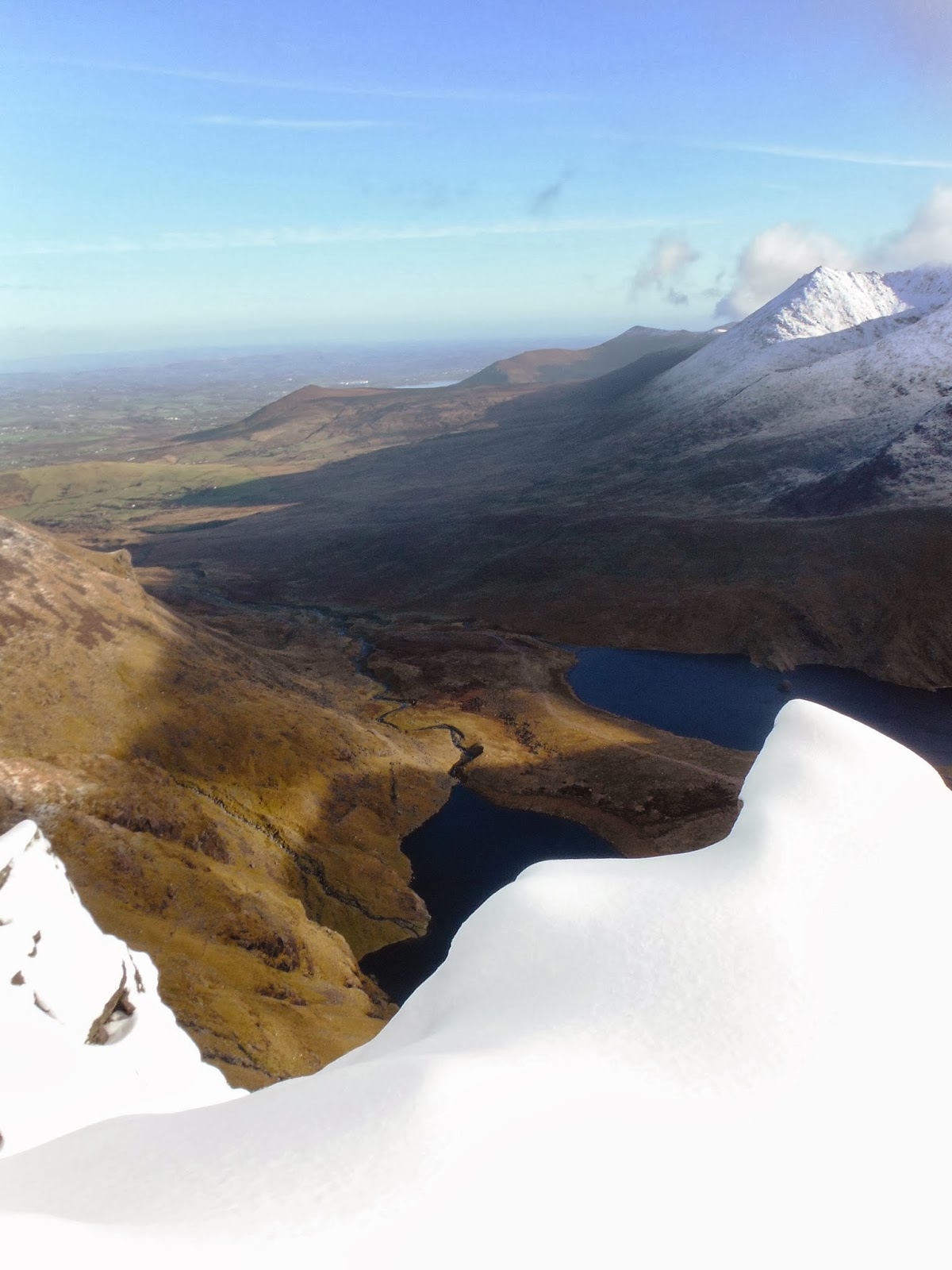 Quite a bit of snow on the route but extremely soft, powdery and unconsolidated and so I climbed ever so slowly, carefully and meticulously and topped out in just under 2 hours to the most sublime vista. Descended via the Zig-Zags and strolled out the Glen as the rain arrived. A truly spectacular and at times – testing day on the mighty Howlin’ of Corrán Tuathail. 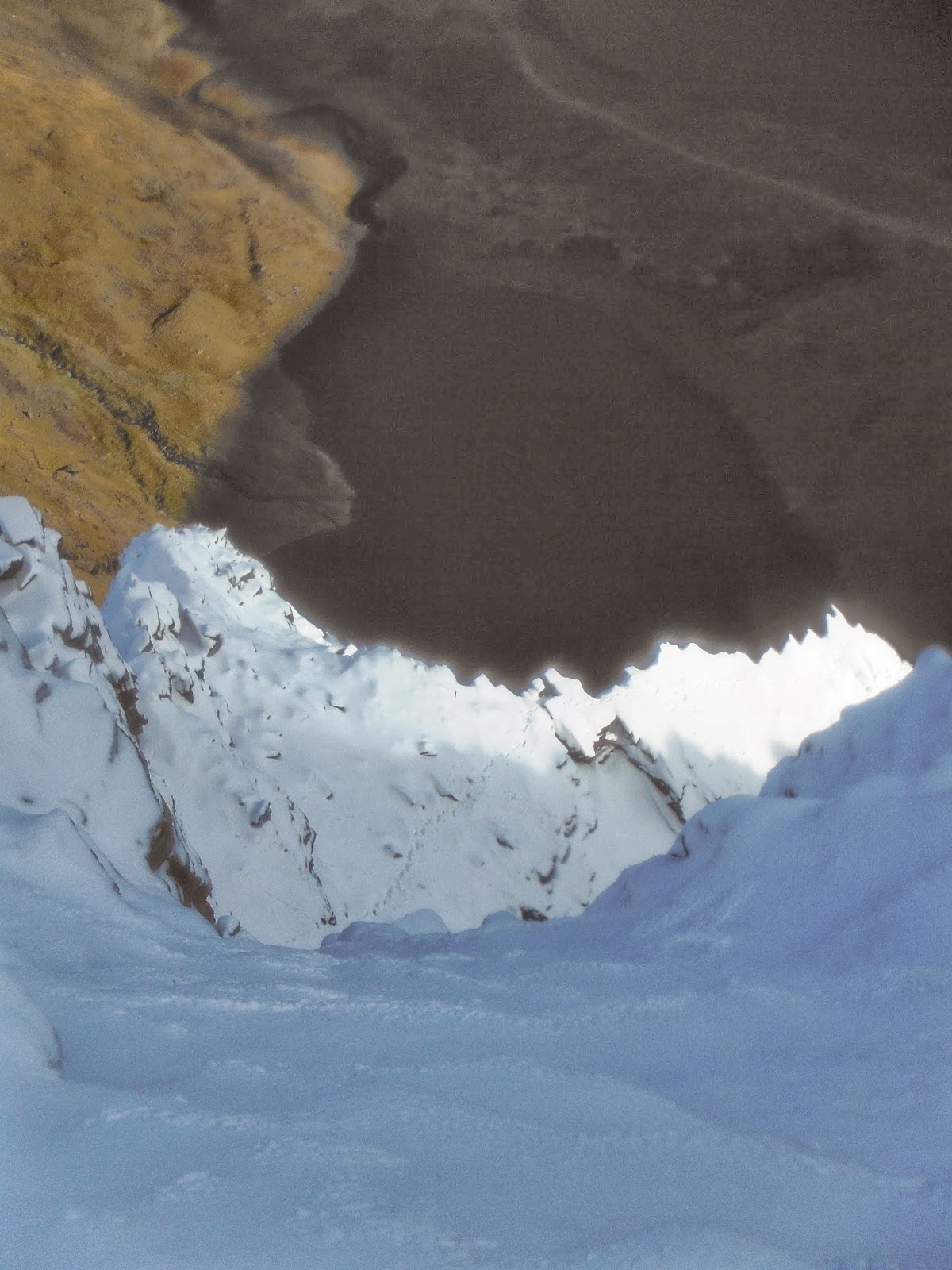